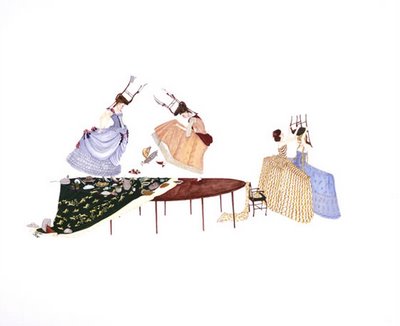 Strange things are going on in Amy Cutler’s paintings at Brown University’s Bell Gallery. A woman stands forlornly next to a heap of cakes in a wood trying to ignore the pigs it attracts. A pair of ladies walk bent under the ponies strapped to their backs. A woman irons a lady’s tongue. A lady with an egg basket for a head checks for eggs in a henhouse stocked with chickens with women’s heads.

They could be illustrations of fairy tales -- not Disney’s squeaky clean fables, but stories from the land of the original Grimm brothers’ yarns in which Cinderella’s shoe wasn’t just too small for her rotten step-sisters, but their toes were lopped off to make their feet fit. Like Grimm stories, they tell of coming of age, of womanhood, in a menacing, weird world.

Cutler’s characters sprout brooms for arms, are joined by their dangling noses or braided hair, swap places with animals. Boyfriends are melting snowmen. Robins swarm down upon a woman so nurturing she has a birdhouse for a head. In “Dinner Party” (2002), debutantes in elaborate bustled gowns (think mating plumage) bind cleavers and forks to the legs of chairs, which they tie atop their heads like antlers. Then they leap onto a lavishly set table to joust like deer during rutting season.

In “Traction” (2002), a quartet of women use their long long braids of hair to drag a house across a snowy field. Girls peek out from the front windows or sit inside with their heads on tables, their braids rising to the ceiling and spun onto giant spools upstairs. It feels like grrl power liberating women from sweatshops or women taking back the power of their bodies or something like that that you can’t quite put your finger on. You worry that their long braids will snap and the dream will fail.

Cutler, a 32-year-old New Yorker whose paintings were featured in the 2004 Whitney Biennial and "Greater New York" at P.S. 1 in 2005, works primarily in gouache (opaque watercolor) on paper, theatrically floating her characters and props in wide open white spaces. But she renders the people and critters stiffly, as if all their joints needed oiling. She isn’t quite able to infuse life into her realism. It’s an irritating lapse in technique, but it can lend her images an endearing human awkwardness.

And then Cutler will grab you with a magical scene like “Campsite” (2002), which shows a trio of girls lying in a forest clearing, the long dresses they’re wearing turned into tents. You wouldn’t guess that this was inspired by Cutler’s shock at an ad from a couple (apparently a pair of eugenicists) seeking an Ivy League blonde to give up her eggs -- that’s why that lady huddled inside the first girl’s tent-dress has a basket of bird eggs. But even if the subject of harvesting human eggs isn’t immediately apparent, the tent-dresses become enigmatic metaphors for how women’s bodies are entered during sex and become shelters during pregnancy.

These are girly paintings, complete with ponies and frilly dresses, that sound deep down archetypes of womanhood and speak to the unresolved feelings about femininity today (Cutler’s people are nearly all female) among those born in the wake of the women’s lib movement. What do we make of scientific advances that allow us to remove women’s eggs to generate babies in laboratories and fertility treatments that have packed schools with twins and triplets? Why do women still carry much of the burden of domestic chores? Is choosing to be a stay-at-home mom a betrayal of feminists fighting for women’s equality in the workplace? Cutler’s success is embodying these questions in mysterious dramas, calling forth feelings that sneak up on you sidelong like the unlogic of a dream.