Plus Ab-Ex and Photography 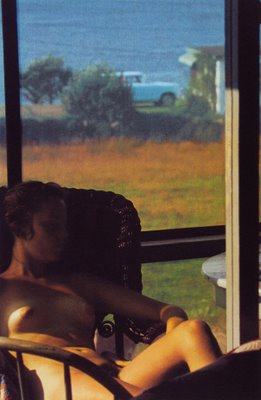 Above is a shot New York photographer Saul Leiter took when he spent a week visiting Gloucester’s Lanesville neighborhood with, uh, friends as a 35-year-old in 1958. It was featured last month in his exhibition at New York’s Howard Greenberg Gallery.

Gloucester was a summer destination for major American artists from Winslow Homer until the Abstract Expressionists. Mark Rothko, Barnett Newman and Adolph Gottlieb all summered there.

I don’t know who Leiter’s Gloucester friends were that summer, but he began his artistic career as a painter and took up photography in the 1940s at the encouragement of Abstract Expressionist painter Richard Pousette-Dart, who was then experimenting with photography and gave Leiter a camera. Leiter’s photos often have broken-up, abstracted compositions that echo New York abstract painting of the time.

It’s another example of the exchange of ideas and inspiration between the Abstract Expressionists and photographers – a subject touched on by Boston College’s “Pollock Matters” exhibit last fall. That show made a convincing case that Jackson Pollock drew inspiration for his signature drips and compositions from his pal Herbert Matter’s experimental abstract photos. But the subject got buried by the curators’ focus on whether the recently-found, alleged Pollock paintings there were authentic. (The curators leaned to yes; the scientists leaned to no.)

A couple other photographers to consider in the relationship between Ab-Ex painting and photography are Aaron Siskind (who also summered in Gloucester) and Rudy Burckhardt. With Burckhardt, I’m thinking in particular of the abstracty shots of grass and things that he made for ARTnews to publish with his portraits of Ab-Ex artists, if I’m remembering correctly.

Ab-Ex and photography is an exhibition waiting to happen.

As for Leiter, there’s been something of a resurgence of interest in his work since the mid 1990s, when he began printing his color slides from the late 1940s to ‘60s. He had printed few of his lush color photos back when he shot them because of the expense of color printing; instead he presented them as slide shows. The result of the new prints was his first museum solo show at the Milwaukee Art Museum in 2006 (some of this work appeared at Boston’s Gallery Kayafas in January 2007).