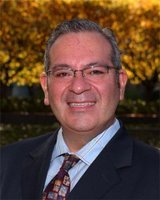 José Ortiz, the deputy director and chief of finance and administration at the Smithsonian Institution’s Hirshhorn Museum and Sculpture Garden since 2005, has been named deputy director of the Harvard Art Museum, the museum announced today. He is expected to begin work in Cambridge on March 2.

Ortiz replaces Richard Benefield, the Harvard museum’s deputy director from 1999 to mid-September 2008, who left to be founding executive director of the Walt Disney Family Museum, which is being built in San Francisco. (Cool, Richard!)

Ortiz previously served as manager for administration at New York’s Cloisters and in administrative positions at the Smithsonian Institution’s Anacostia Museum and New York’s Museum of Television and Radio. He served as a manager for Citibank in New York from 1978 to 1991.