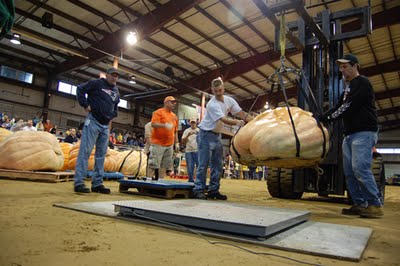 “This one’s heavy,” the men said with some awe as they loaded Joe Jutras’s pumpkin onto the scales at the All New England Giant Pumpkin Weigh-Off at the Topsfield Fair in Massachusetts this morning.

Jutras, who resides in North Scituate, Rhode Island, arrived as the world record holder of giant pumpkin growing, for a 1,689-pounder he brought to the Topsfield Fair in 2007. And just after 11 a.m. his entry took the lead in this year’s Topsfield competition at 1,187 pounds.

Giant pumpkin competitions have become a phenomenon over the past quarter century. About 70 weigh-offs will take place around the world this year – including 27 this weekend – that are sanctioned by the officiating body, Great Pumpkin Commonwealth. The contest at the Topsfield Fair, started 26 years ago, was one of the originals.

Over the next hour, Jutras fell behind the competition. The lead passed to a 1,258.8-pounder grown by Glen Peters of Billerica, Massachusetts; a 1,273.4-pounder (pictured second below) by Jim Kuhn of Goffstown, New Hampshire; a 1,373.6-pounder by Art Kaczenski of Erving, Massachusetts; a 1,409-pounder (pictured first below) by Bruce Whittier of Henniker, New Hampshire.

The last pumpkin to be weighed was a pale white-orange beast that Bill Rodonis of Litchfield, New Hampshire, started from a seed back on April 19. “I had a [world] record in 2007,” he recalled, “but then Joe Jutris came on 20 minutes later and broke it.” The crowd watched as the forklift lowered this year’s entry onto the scale. The pumpkin registered 1,471.6 pounds, winning the competition.

By the Bye: Wes Dwelly of Oakham, Massachusetts, won the long gourd competition with a world record length of 129.38 inches.

The Topsfield Fair, Route 1, Topsfield, Massachusetts, Oct. 2 to 12, 2009. Bill Rodonis’s winning pumpkin can be seen in the Fruits and Vegetables Barn through the end of the fair. 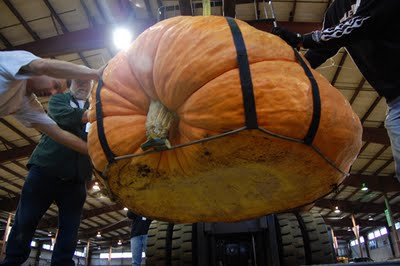 Below: Bill Rodonis's pumpkin is lowered onto the scale.

Below: Bill Rodonis and his wife Linda pose with his winning 1,471.6-pound pumpkin. 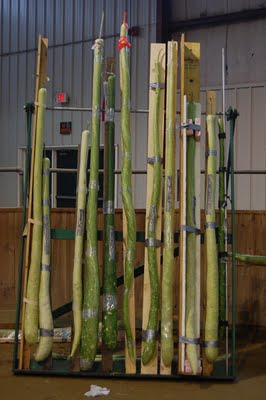