“Wunderground” at Rhode Island School of Design Museum, September 2006 to Jan. 7, 2007. In retrospect, this survey of the best of the past decade of underground Providence’s obsessive monstery art seemed like a veledictory to an era. Some of the gang ( Jim Drain) have migrated to tony precincts of the art world, while Fort Thunder founders Mat Brinkman and Brian Chippendale have gone to ground, living in another marvelous monster-, art- and bicycle-stuffed loft they’re scheduled to be kicked out of any minute now. The show was big and messy and thrilling and flawed, which, of course, was apt. The new artwork was hit or miss, which seemed more a problem of the curating and artists having off days or not quite being into it, than a predictor of the future. Chippendale and Jungil Hong’s work in the backroom at Providence’s Gallery Agniel in September, and Chippendale’s show and grandiose new comic book there in October were the bee’s knees. Perhaps the RISD show’s most interesting effect was to foreground a generation gap in contemporary art. While youngsters thrilled to the wild sensory overload, wrestled with mixed feelings about who was in and out, and debated whether the hip underground scene was spoiled by institutional embrace, many oldsters didn’t get it (including RISD’s curator), or complained that it was a rehash of the ‘60s, or seemed jealous of its street cred and were all too happy to declare the scene dead. 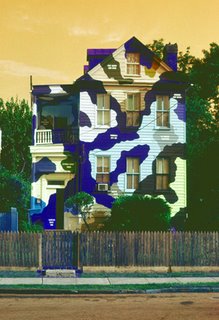 “ America Starts Here” at MIT’s List Visual Art Center, February to April. The smartest, most humane conceptual art show this year. The artifacts of Kate Ericson and Mel Ziegler’s work were a frustratingly mixed bag, but their beautiful, witty ideas still resonate. A sample: They painted a house in a historic neighborhood in Charleston with a camouflage pattern incorporating all the officially approved neighborhood colors – interrogating the enforced blending in and teasing it at the same time. This show was the best of political art: thinking globally, acting locally, transcending the cliché. 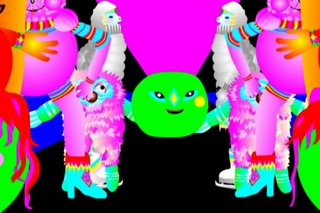 Paper Rad's "Trash Talking" DVD, released in June by Providence's Load Records. Eye-popping, psychedelic transmissions from some screwball planet of ‘80s nostalgia where Garfield, Pac-Man and Alf are gurus and their manifestations masterpieces. Who knows what it means, but this Easthampton collective, whose international stature is ever on the rise, blows your mind – if the strobing lights don’t give you a seizure first.

The Institute for Infinitely Small Things' “The City Formerly Known as Cambridge” project. The art collective invited visitors to Cambridge festivals this summer to rename the city’s squares, buildings, and streets via an auction system. A brilliant philosophical act of chutzpah, recreating in microcosm the fraught nature of naming places and the money, power and social meaning behind names. (Photo by Jim Manning/The Institute for Infinitely Small Things.) 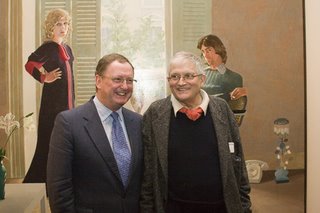 “David Hockney Portraits” at the Museum of Fine Arts, February to May. The grand old goat (here with MFA director Malcolm Rogers to his left) filled the museum with portraits of friends and lovers. Fun and funny, intimate, bland, overstuffed, messy, mixed, vital. 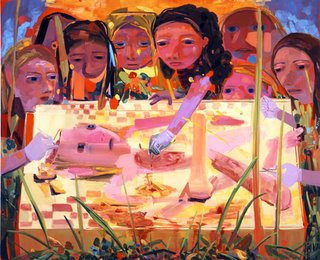 Dana Schutz at Brandeis’ Rose Art Museum, January to April. A smart, sassy retrospective for one of the best painters of the moment. Led by curator Raphaela Platow, the Rose is the hottest museum for contemporary art in Boston (well, Waltham). 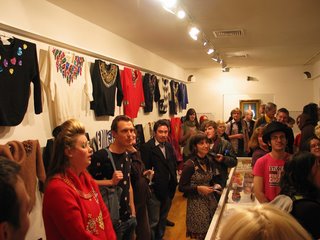 Leslie Hall’s “Gem Sweaters” fifth-year show at the Museum School, April and May. A big, messy, wonderful graduation shrine-installation about the aesthetic glories of all those middle class fashion faux pas that make us so uncomfortable – big glasses, big hair, big gals in too-tight spandex pants and, of course, froofy sequined sweaters. It’s middle class taste reimagined as folk art. Hall (the lady in the red sweater in this Chris Eramo photo of her show) is full of potential. The magic of her sweater photos was diminished when they were shown at Judi Rotenberg on Newbury Street in August without the whole gem context. But I can’t wait for her Traveling Scholar show at the MFA in 2008.

“Secular/Sacred” Medieval art at Boston College, February to June. Boston hosted some great old stuff this year: “Cosmophilia” at BC, Indian miniatures at MFA, Rembrandt etchings at Harvard. But the best was when BC went Medieval last spring – including an astonishing 33-foot-long 15th century French scroll recounting the history of the world. Contemporary art’s obsession with intimacy, pattern, handmade, ornament (see MassArt’s “Crafty”) still can’t match this stuff. BC puts together some of the finest scholarly shows around. And they’re beautiful to boot. 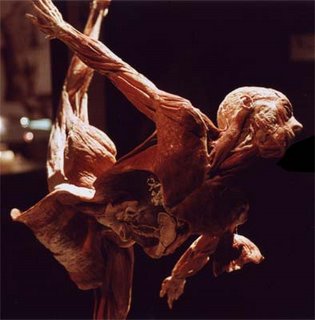 “Body Worlds 2” at the Museum of Science, July 2006 to Jan. 7, 2007. Who could resist a good old-time freak show given the respectable imprimatur of science and edumacation? And after Body Worlds mastermind Gunther von Hagens’ smashing cameo in the new James Bond flick, can a starring role as a sinister genius be far off? 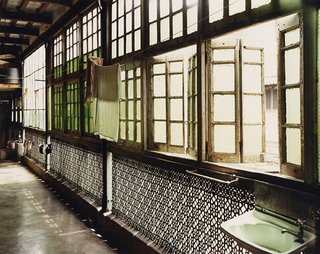 Bernie Toale Gallery. Big, posh, perfectly coiffed, romantic shows. The anchor of the South End. The result: Laura McPhee (at left, her “Dutta House at Chorebagan (Thieves Garden), North Kolkata,” 2001) and Ambreen Butt at the MFA, Sarah Walker at the Rose, Naoe Suzuki in DeCordova Annual, Greg Mencoff and Linda Bond in Fitchburg Art Museum’s biennial. Was there a more direct route for local artists to local museums this year? 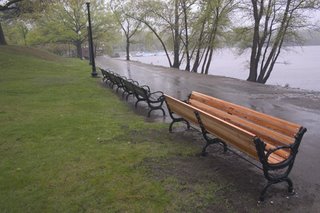 Matthew Hincman’s charmingly unwelcoming guerilla art park bench that he snuck into place at Jamaica Pond in May without approval – only to have officialdom embrace it. 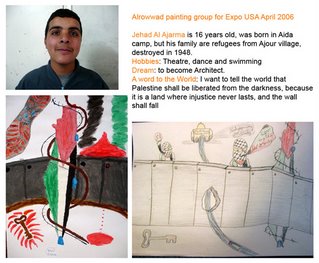 An April show in the Brandeis library of drawings and testimonials by Palestinian children organized by student Lior Halperin was kicked out by administrators because the subject – Palestinian views of the Palestinian-Israeli conflict -- turned out to be too touchy. So it was rehung at MIT. The art was only okay, but for such a quick, seat-of-the-pants, student-organized show it accomplished what it set out to do and how. The controversy landed it on the front page of the Globe and for a few days everyone was talking about it. The ripples are still being felt. 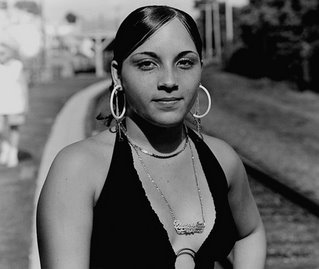 Ernie Morin’s Gloucester photos at Gloucester City Hall. Morin (a pal of mine) has spent five years photographing the people and streets of Gloucester in luminous black and white, producing a comprehensive – and often seething – document of what happens when work drains out of a gentrifying working class city. He’s exhibited the result in dribs and drabs as he’s gone along, but on the night of Oct. 19 several hundred people crowded into City Hall for a big coming out party. Somehow Morin turned a PowerPoint slide show into a ravishing aria to the hardscrabble glory of the great seaport – followed by a sobering public discussion of what can be done to preserve it and how to adapt to remain vital. Too often artists pay lip service to community engagement, but here an artist sparked a real community dialogue. Now people outside of Cape Ann need to take notice. 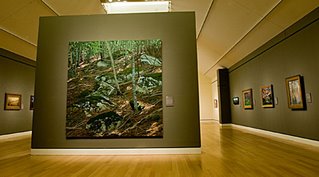 “Painting Summer in New England” at Salem’s Peabody Essex Museum, April to September. The sweetest eye-candy show in the region this year. A lark. But secreted inside this who’s who of 20th century art was another show that spoke about New England vacations as a hidden wellspring of great American Modernist painting. (Above, gallery view showing Neil Welliver’s 1978 “Late Night” from the Herbert Plimpton Collection of the Rose Art Museum, Brandeis University, Waltham. Photo courtesy of the Peabody Essex Museum.) 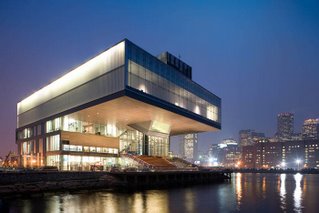 The new Institute of Contemporary Art, opened Dec. 10. The ICA’s move from the Back Bay to flashy new digs in the South Boston Seaport electrified Boston’s art scene this fall – and months of construction delays wonderfully built suspense. Director Jill Medvedow and her board (Barbara Lee!) aim to put the city on the contemporary art map with a bold new building and expanded programming. The opening shows – and building – were more hype than success. Curator Nicholas Baume’s “Super Vision” was particularly dull and timid. I’m willing to chalk it up to opening season jitters, for now. The ICA’s triumph is that Medvedow and company have raised the stakes for what is expected of Boston art. It’s a needed challenge to all of us here.