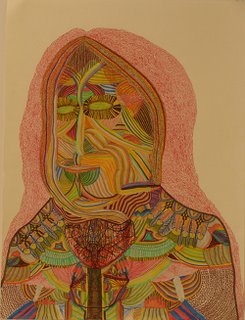 The inventiveness in drawing – or, should I say, works on paper – trumps most painting on canvas these days. And “Wilderland,” Second Gallery’s seven-artist show, is a sampler of the loose, offhand, sketchbooky, cartoony, obsessively graphic works on paper that have become super hip in the wake of folks like Fort Thunder, Royal Art Lodge, Ron Rege Jr., Marc Bell, Paper Rad and Dearraindrop. Here the artists are distinguished by rainbow palettes, handsome faux amateur technique and lots of untouched paper.

Eric Shaw’s wildly imagined people and monsters (see untitled drawings at top and left) are the best of the bunch. 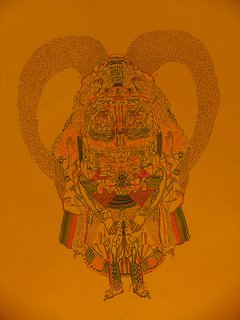 They seem to have sprung from some obsessive adolescent’s notebook or some tribe’s mysterious archive of totems. His intense, fine mark-making has a manic energy, while also suggesting that his characters are heavily tattooed or sporting lavishly embroidered headdresses and capes.

Much of the rest of the work here, though fun, feels like the beginning of ideas and techniques, rather than work fully developed and come into its own.

Boston’s Anna Trzaska (untitled drawing, below left) explores the permutations of a set of motifs -- clouds, industrial chimneys, wood boxes, ribbons that weave in and out of each other – as if they were repertory players. She works between cartoony, hard-outlined clouds and boxes; big flat abstract shapes; and soft watercolory fogs. 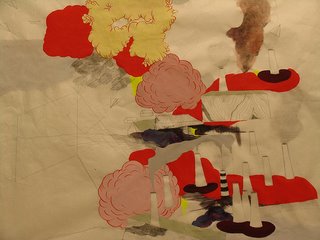 Shaun Kessler of Brooklyn combines paper (and computer?) collage of dolphins, shoes, masks and plants with the increasingly popular diamonds, stripes and checkerboard motifs. In one, he fills the coupon boxes of a supermarket circular with rainbow stripes, tapping into the edge of something compelling about middle class trash culture.

Evan Quigley of Toronto contributes clunky sketches of goblets, cups, pitchers and lamps in empty rooms, perhaps dingy art school studios. There’s lots of stray marks and daubs and doodling. It could be the work of some grammar school kid hooked on Giorgio Morandi. 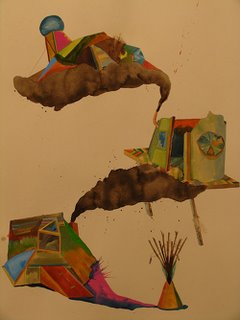 Brian Willmont of Boston renders surreally stacked forms in what appears to be watercolor and pencil (see “Bouancy” at left). In one fairly straightforward example, a boat carries a tree and a house trailer and a hut, topped with a square sail. Often the relationships are even more nonsensical, creating strange spatial disjunctions.

The more I see of this style the more it becomes clear how these artists are aesthetic descendents of Saul Steinberg and Henry Darger, who loom ever larger in our artistic firmament. New England was a hotbed of this stuff in the late ‘90s and early 2000s (see the list of names I began with), championed by Cambridge’s now defunct Highwater Books (my former publisher).