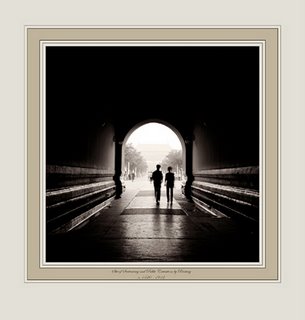 Roxbury artist Lana Caplan writes that “Since 2002, I’ve been researching former sites of public executions, interested in how the function of a place changes and what it holds of its history.”

The resulting photos and films are featured in her exhibit “Watch This,” which closes today at Gallery Naga. The photos are pretty great. Here are romantic shots of a hall that opens onto one of the grand plazas of Beijing’s Forbidden City (pictured above), London’s Marble Arch (below), Paris’ Louvre lit up at night (further below). The romance of the images is heightened by Caplan’s medium: sweet sepia toned silverprints. Then they’re elegantly framed with a legend printed beneath each scene. 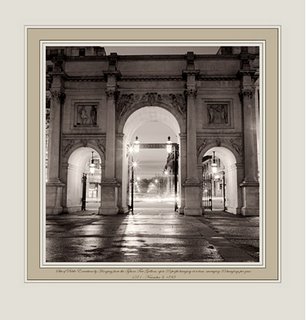 The texts are jarring next to the pretty pictures of pretty architecture. And they get you thinking about what the architecture symbolizes. 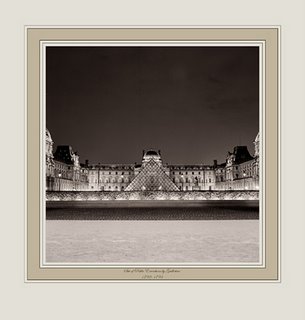 London’s Marble Arch was erected after the executions there ceased, and so the artistry of the arch could be interpreted as the pacification and civilization of the site. But the Forbidden City and Louvre (except for I.M. Pei’s glass pyramid) look much as they did when they were sites of public executions. And so I begin to read the buildings, in all their majestic beauty, as symbols of the power of the state, its elegant civilized refinement , its wealth, and its bloody orderly violence.

A couple videos of former execution sites – the arches of the Roman Coliseum (still from "In Out" below) and people in the Vatican’s St. Peter’s Square – aren’t as compelling. I think the stillness of the photos is more affecting than the jittery speed of the videos, which seems to draw attention to the formal aspects of the piece and away from the subject at hand. 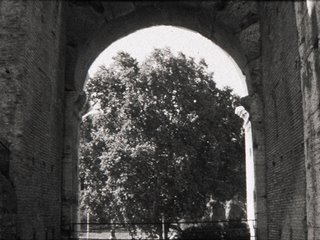 Note that all public execution sites Caplan chooses here are foreign and, except for China, nations that have abolished capital punishment. I wonder what Caplan would do with Boston Common, where public hangings took place until 1817.

The show is rounded out by a pair of videos that you see by peeping into little white boxes mounted on the gallery wall. “Love in the Afternoon” features motorcycles leaping over the crest of hill, a bikini-clad lady running in surf, a couple passionately kissing and lots of scratchy film leader. “Drink Up” features smiles, wine glasses, ladies walking and a women’s cheek caressed by a man’s hand. The videos are nicely put together, but people have been making these sorts of cut-and-paste experimental films for decades and Caplan doesn’t add anything distinctive here.