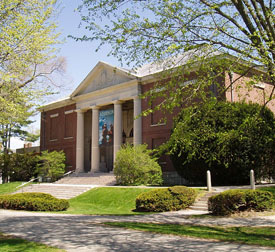 The Addison Gallery at Phillips Academy in Andover is planning a renovation and expansion that could begin as soon as next summer.

The spring 2007 Andover Bulletin reported that the project “would expand the building by approximately 60 percent and renovate the existing structure. Also, a new education center would be constructed within the Addison to provide a multi-purpose space in which classes and individual scholars could study art.”

The Bulletin said that charter trustee Thomas C. Israel (class of 1962) had pledged $1 million toward the expansion of the Addison, a project then in the “design phase.”

It's rumored that the museum will close next summer for the renovation and expansion. The museum’s publicists have declined to provide me details in recent months, but (as the Addison’s blog noted yesterday) the Addison’s home page teases with a new button “Building for the Addison’s Future,” which isn’t yet operational. I expect it will offer official information soon.

Update: No building plans seem to have been filed yet with the town of Andover. And a publicist for the museum tells me this morning that officials don't plan to reveal project details until mid or late September.