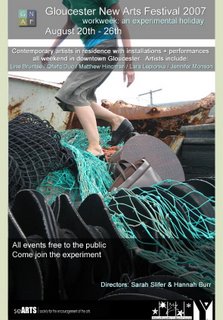 The third annual Gloucester New Arts Festival runs from Thursday to Sunday in Gloucester. Organized by Gloucester dancer Sarah Slifer and Cambridge visual artist Hannah Burr, it offers a selection of performances and brief exhibitions – mostly in unusual places like beaches, a supermarket and an ice factory. And it's almost all free.

Presenting a mix of artists from Gloucester (Lara Lepionka, Susan Erony) with outsiders, it showcases some of the hip stuff coming out of a suburban outpost long known for its art (but mostly of the conservative seascape and landscape variety ) while also providing outside inspiration to inspire more new work in the old fishing city. (Disclosure: I’ve participated in the festival in past years.)

Gloucester, where I used to live, has produced a small coterie of interesting artists in recent years. Photography (not really represented in the festival) is a particular strength – check out the work of Anne Rearck, who won a Massachusetts Cultural Council artist grant this year.

At this year's New Art Fest, I’m curious to see what the wily Boston sculptor Matthew Hincman does. I thought the bench he made and secreted into Jamaica Pond was one of the best works in the region last year. I hear Lepionka has made styrofoam carvings based on interviews with local supermarket workers and installed them there. (Or something like that – I can’t tell from the website.) My pal, the painter Susan Erony plans to exhibit her first draft of a project in which she’s begun taking on the work of Ur Gloucester poet Charles Olson. And “Transportation Awareness Day” also seems like an idea with potential.

Note: I’m going to try posting occasional “Check It Out” posts. They’re meant as previews and suggestions of events to see, but since they’ll appear before the events, they’re by nature describing stuff I ain’t seen yet. What I’m saying is they look promising.