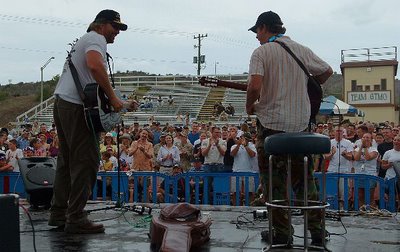 Recently a friend criticized me for my swipe at contemporary country music in my review of Henry Horenstein’s photos of the 1970s country music scene:

Country music changed [after the ‘70s] too. It remains identified with American bedrock, but it got slicked-up and went big business and mainstream. It sings of the loves and broken hearts, drinking and manual labor, Jesus and patriotism of our white (especially rural and Southern) working class. These days that means conservative red state America and a steadfast hawkishness on our current wars. Toby Keith’s 2001 song “Courtesy of the Red, White and Blue (The Angry American)” and Lee Greenwood’s 1984 tune “God Bless the U.S.A.” became war rallying cries. (The troops’ soundtrack for contemporary combat, however, seems to be metal, based on footage that Iraq vets have given me and that I’ve seen on YouTube.) Considering the way our wars are going, perhaps contemporary country music deserves a warning label: This music may be hazardous to you and your nation’s health.

My friend said it was unfair to pan a whole genre of music – which wasn’t my intent. I certainly could have written the above more tightly, but what I meant to take on the politics of recent country music – country music at its most popular and heavily promoted.

In recent years, there’s been much talk about how political art tends to be lefty, but there’s been a steady stream of right wing art in movies, novels and country music. Toby Keith (pictured above performing at Guantanamo Bay, Cuba, in 2005), as a best-selling country music star, is representative of what the genre stands for these days. Besides the usual songs about drinking and loving, he’s been a prominent war booster. The message of his song “Courtesy of the Red, White and Blue (The Angry American),” which he has said he wrote a week after the Sept. 11 attacks, is straightforward: “You'll be sorry that you messed with/The U.S. of A./'Cause we'll put a boot in your ass/It's the American way.” This was what a lot of Americans were feeling then. It’s basically a revenge fantasy and its words are not particularly right or left.

But, of course, it’s not just what you say but how and where you say it. Everyone has been speaking in political code, and his audience got the right-wing message – which apparently included (erroneously) linking Iraq with the Sept. 11 attacks. So “Courtesy of the Red, White and Blue (The Angry American),” as CBS News reported at the end of 2003, was “used as a battle cry by U.S. armed services in Iraq. Bombs were branded with it. One of the first tanks into Baghdad was, as well. And none of that is lost on President Bush, who asked Keith to be his opening act several times this year.” 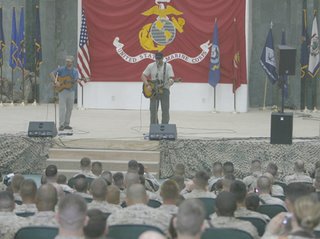 My issue here isn’t country music as a genre, but the substance and influence of country music that acts as political art – and, to cite a specific example, Keith’s right-wing music, which he performs at outright political events. Keith, who says he's a longtime Democrat, wrote on his website about his November 2003 album “Shock’N Y’All” (a pun on “shock and awe”): “I get accused of banging the war drum by the media – I’m all for peace, but from time to time we have no choice but to fight for our freedom.” What Keith apparently meant then – eight months in the Iraq war with no weapons of mass destruction found – was that he supported the Iraq war (and you should too) because it was a fight for our freedom. (Pictured above, Keith performs for troops at the Camp Fallujah chapel in Iraq in May 2006.)

Keith’s message has reach. His new album “Big Dog Daddy” debuted in the number one spot of the Billboard Album Charts when it was released June 12. This week it fell from 36th place to 38th. Billboard reported June 20 that 204,000 copies had already been sold in the United States. On the album, Keith performs the Craig Wiseman-Chris Wallin song “Love Me If You Can.” Keith says on his website, “This song wasn’t written for me, but it sounds like I wrote it myself. Every word Craig wrote tells it like it is for me.”

Here Keith reiterates the same themes he addressed eight months into the Iraq war: “Sometimes I think that war is necessary/Every night I pray for peace on earth” and then the chorus: “I’m a man of my convictions/Call me wrong/Call me right/But I bring my better angels to every fight./You might not like where I’m going/But you sure know where I stand/Hate me if you want to/Love me if you can.”

I take this talk of standing by his convictions to mean that he still supports Bush’s inept war policies. And note how the lyrics flip the meaning of Abraham Lincoln's line “the better angels of our nature” from the president’s March 1861 first inaugural address. That speech was Lincoln’s lawyerly argument to head off the start of the Civil War, appealing to "the better angels of our nature" for a peaceful resolution to the North and South’s strained relations. Keith’s "better angels" bring him to war.

In a later verse Keith adds: “And I believe that Jesus/Looks down here and sees us/If you ask him he would say…” and then he returns to the chorus: “I’m a man of my convictions/Call me wrong/Call me right/But I bring my better angels to every fight…” Keith is equating himself with Jesus and saying that his politics are Jesus’ politics. Wow.

Keith’s music – and hit songs of a similar bent by Clint Black ("Iraq and Roll"), Darryl Worley (“Have You Forgotten?”), etc. – was part of the apparatus that helped get us into our mess in Iraq, and as it becomes ever more clear how crappily the Iraq war has been promoted, planned and run, this sort of political art requires continued criticism.

Related:
The Dixie Chicks.
If it ain't pro war, it ain't on country radio.
Ditto – with comment by Kenny Rogers.
Pentagon stages political march with Clint Black.
An album you never heard of by Democratic country musicians frustrated with the style’s conservative image.
How country went conservative.
How country music soured on pimping for the Iraq war and started writing songs about how tough it is to be an American soldier. (For subscribers only)
Toby Keith responds to critics.