Check it out: Jim Drain

Drain, who now lives in Miami, produced amazing posters, comics and costumes while in Providence. He has since won acclaim for his psychedelic-tribal-style knit, sewn and beaded abstract sculptures. For the RISD Museum’s “Wunderground” exhibit last year, he produced "Vertical Faces with Sculpture and Totem Pole," a beaded zigzag-striped shrine-installation incorporating a century-old Native American totem pole from the museum's collection. 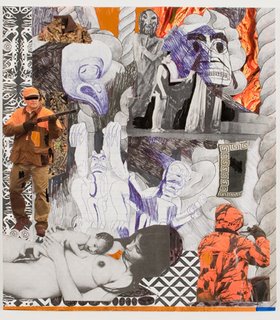 In this new show, Greene Naftali’s highfalutin’ press release explains, “Drain continues his merger of psychedelic formalism with the irreverent critique of pop culture common to subcultural art. By pushing these styles to their extremes, he denotes the hallucinogenic character of the international consumer world and its affect on human bodies.”