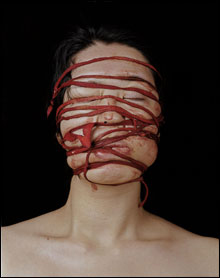 I write at the beginning of my review of “Global Feminisms” at Wellesley College’s Davis Museum that it:

could be one of the most important exhibits of the year. It rounds up nearly 80 artworks by 63 women artists born since 1960 from nearly 40 countries to consider the present state of feminist art in the West and provide an overview of some of the cool stuff women are making elsewhere. The spotlight is on a biting critique of sexism and its ugly permutations around the world. And there’s lots of video, a sign of feminist art’s long-time focus on (recorded) performance — something that’s come to have a major place in the art world.

But “Global Feminisms” is a depressing experience. When I first saw it — in March, at the Brooklyn Museum, where it originated — one piece stuck in my head as epitomizing both the best and the worst of the exhibit. Israeli artist Sigalit Landau’s 2000 video “Barbed Hula” shows the artist naked and mangling her belly by hula-hooping with a ring of barbed wire on a beach. “The object of pain,” the catalogue explains, is “a symbol of the geographic barrier created along the West Bank to delineate land between Palestine and Israel.”

At the Davis Museum, which is reopening after more than a year of building repairs, the violence is toned down a bit because Davis curator Elaine Mehalakes gives the art (three-quarters of what was shown in Brooklyn) more room to breathe. But the exhibit still puts a dispiriting emphasis on self-mutilation.

I agree with you. It feels like it is an important exhibit and it is also depressing. After visiting about half the show I had to leave (because I felt overwhelmed) and promise myself I would go back to see the rest. Such violence, it was an intense viewing experience and a testament to the powerful ways art communicates.