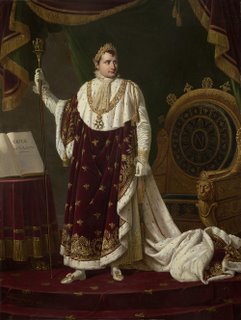 Boston’s Museum of Fine Arts has been advertising its Napoleon show with an ad on WBUR radio that concludes: “Centuries after his rule he still has the power to hold thousands captive.”

Considering Napoleon actually did hold thousands of people captive – and ordered the death of thousands of captives – is this really the right way to advertise this show?

Pictured: Robert Lefevre’s 1812 oil painting “Portrait of Napoleon I in his Coronation Robes,” in the MFA’s collection.