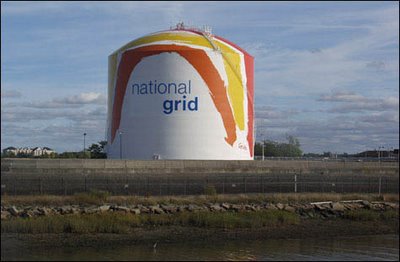 A free panel discussion of the late Boston artist Sister Corita Kent and the history of her 1971 rainbow design for the National Grid gas tank (above) in Dorchester will be held at the Savin Hill Yacht Club, 400 Morrissey Blvd., Boston, at 7 p.m. Saturday, Oct. 27.

Here’s the beginning of my preview:

The question that arises when you consider the dazzling screenprints of … Sister Corita Kent is: how could an artist so good be so ignored? I suspect Kent, who’s best known in town for her cutesy rainbow stripes painted across the giant National Grid gas tank off Route 93 in Dorchester, is overlooked because she was a feminist who made boldly political and religious work. Three strikes and you’re out.

One of the persistent questions about the rainbow gas tank is whether Ho Chi Minh’s profile was painted into one of the stripes, as some have claimed. I went through some of Kent's papers at Harvard’s Schlesinger Library some months back and found a February 1986 article in the Bedford Minute Man in which Kent answered this question:

Yes, but I didn’t put it there. How do you explain it to the press? It is a common practice to look at clouds and see things. I always said it was an accident. But after watching the [television] series on Vietnam last year, I’ve decided it was a miracle.

Related:
I also wrote about Kent when her work was included in the “Dissent” exhibit at Harvard’s Fogg Museum last winter.

You can see about 40 of Corita's 60s pop at MASSMoCA through Dec. On loan from the Corita Art Center in Los Angeles, (www.corita.org) they are part of "The Believers" exhibition that's still up.

You can see a large number of Corita's 60s pop at MASSMoCA through Dec. On loan from the Corita Art Center (www.corita.org) in Los Angeles, these are part of "The Believers" exhibition that is still being shown.