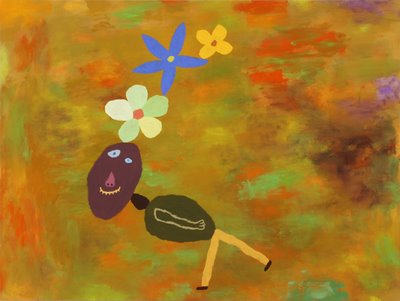 In “The Terrible Burden of Beauty” (2007), a grinning buffoon balances three flowers atop his head. He seems to be made of a pile of sticks and stones (which brings to mind McKie’s assemblages that are actually made of sticks and stones). The balancing act and the fellow’s expression seem a needy plea for affection. “Bird, Interrupted” (2006) is one of McKie’s signature visual gags. Two birds try to perch on a stony birdbath, but the one on the right has missed, its feet dangling in empty air. Its eyes open wide as it recognizes its predicament, like the frozen moment when Wile E. Coyote realizes he’s run off the cliff and hovers frozen above a chasm.

These pictures are incredibly visually charming with their jaunty vocabulary of flat doodley lopsided forms – descendents of early modernist abstraction – arrayed on impressionist fields of color.

But sometimes McKie’s art feels so light – like cocktail party banter – that I’m left wanting more. His work brings to mind the French painter Jean Dubuffet, New Yorker cartoonist William Steig, the Cobra painters who came out of the Netherlands in the 1940s and ‘50s, and the cartoony painters who came out of Chicago in the ‘60s and ‘70s and have become known as the Hairy Who and Chicago Imagists. They all seem to draw inspiration from folk art, particularly the art of children, which they tap for both its formal invention and its fun. But these other artists often have more oomph (for lack of a better word) than McKie. Maybe it’s because the others have more sex or bawdiness or melancholy. Maybe it’s because their compositions are often more dense. I can’t quite put my finger on it.

In this show, McKie’s strength is his terrific moody use of color – often a narrow range of similar hues punctuated by an opposite. For example, “Truth is Stranger Than Non-Fiction” (2006), which depicts a person in a beret whose nose is a pipe, is predominantly crimson and rose punctuated by little passages of green. “Please Pass the Sake” (2007), which depicts a person among a selection of jugs and vases, is rendered in lots of blues and greens contrasted with moments of orange and brown. The many similar colors smolder, until the opposites make them spark. 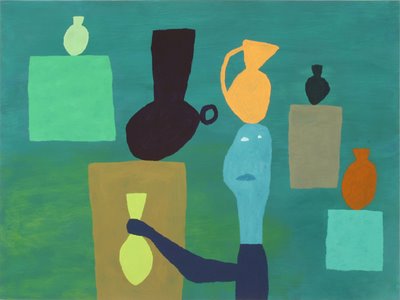