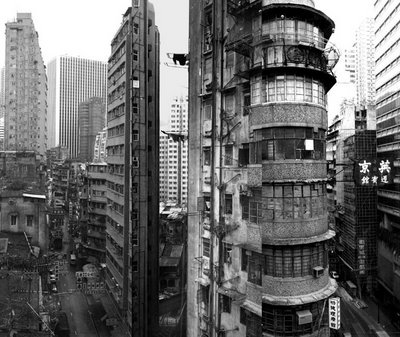 Here’s the beginning of my review of “China seen by . . .” at the University of Rhode Island:

In “China seen by . . .,” an intriguing, densely packed exhibit of 30 works at the University of Rhode Island’s Fine Art Center Galleries, 14 photographers reflect and try to make sense of the industrial dynamo that is China today. Side by side, the images feel like momentary glimpses of a nation at once awesome, bewildering, and massively in flux.

Beijing artist Wang Qingsong’s 2001 triptych “Past, Present and Future” [below] poses models in the heroic stances of Maoist social realist public monuments. China’s past is represented on the left by gun-toting revolutionary soldiers in muddy uniforms. The present, at right, is a troupe of silver-painted soldiers, laborers, and a man and woman holding rolls of paper (architectural plans, perhaps). The future is represented in the center with a group of gold-painted soldiers, a farmer, a welder, and a businessman carrying flowers, cymbals, baskets of fruit, and lanterns.

Like several of the eight Chinese artists gallery director Judith Tolnick Champa has assembled here, Wang draws nostalgically on past artistic models to mull his hopes and doubts about China’s present direction.

Related: I’ve written about some of the artists in the exhibit before. Here’s my review of Burtynsky’s show at Tufts University in Somerville in February. And here’s my view of a May group show at Brown University’s Bell Gallery that included work by New Yorker Sze Tsung Leong. 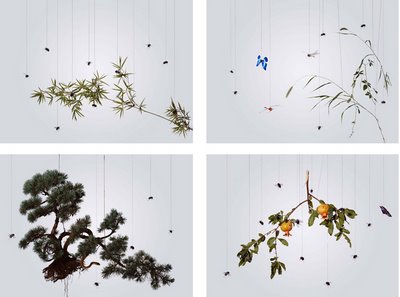