“Some Sort of Uncertainty” at Axiom 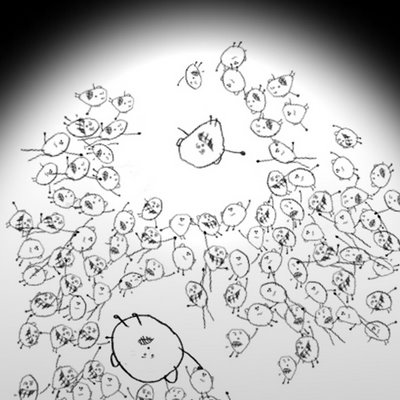 “Some Sort of Uncertainty” at Axiom Gallery, as I wrote in my review,

makes the gallery appear empty, but that’s a tease. Eight artists brought together by guest curator Adriana Ross have hidden stuff all over the place, and they’ve provided a map and a list to create a scavenger hunt. ….

It’s worth the trip to see what Cantabrigian Brian Knep is up to. Peek around a corner into a little inaccessible room and you’ll see a dim circle of light projected on the wall opposite. Flip a nearby switch and an oval of brighter light shines on the wall. Cell-like things (actually a child’s drawings of balloon-head people with stick limbs) swarm to the top of the oval, leaving a gap where the dim circle of light had been. Now and again, one of the cell people enters the circle, inflates, and sinks to the bottom. Then the bright light goes out and the critters drift down, until you switch the light back on and the cycle begins again. Knep’s interactive video installation is a digital cross between watching sea monkeys and playing those ’80s Tomy water pinball games.

Artwork by artwork, Knep has been developing computer programs that produce ever more complex action and dazzling special effects. I’m looking forward to seeing all the incremental advances coalesce into something awesome — here the cycle of action is too simple to sustain significant contemplation. Perhaps if Knep puts a few of these together (a variation of this piece was exhibited at Gasp in 2006), the cumulative effect will be meatier. Or maybe some additional incidents could complicate the action, making it less an equation and more a developing narrative.