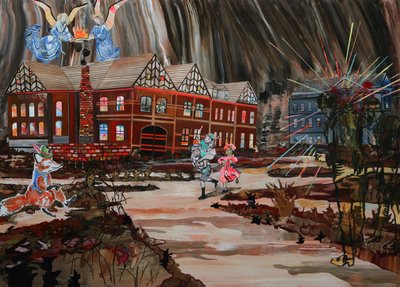 From my review of “Strangefolks” at Allston Skirt:

An ill wind blows through Elizabeth Huey’s 2008 painting “There’s a Boarded Bird Chirping Way Past Two” (pictured above), part of a three-person exhibit of narrative paintings titled “Strangefolks” at the Allston Skirt Gallery.

Three children lope down what appears to be a muddy path through a campus of institutional-type buildings. One child rides piggyback on another. The third kid, who seems to be wearing a muzzle mask, holds reins attached to one of the other’s pants. Behind them, the windows of a building are alight with ominous fluorescent energy, Renaissance-style angels collect smoke from a chimney into what might be a flaming crown, fluorescent rays explode out from another building, and little figures dash about in apparent terror. The black-brown sky seems to have melted, or maybe it’s the Northern Lights. A pair of transparent men watch the action from the foreground. And in the muddy rusty autumnal scrub at left, a fox, who could have been imagined by Richard Scarry, sits on a log and a smiling rabbit lies in brambles.

As in a nightmare, the individual pieces have an evident order, and here and there they connect up to particular worries, but they never resolve into an overall message. Some have compared Huey’s mysterious narratives to those of “outsider” artist Henry Darger. Perhaps it’s illuminating to know that Huey, who lives in New York, has said that in her youth she spent time in a psychiatric institution, or that she used to worship as a Southern Baptist. Or maybe not. Either way, the portents look bad.

“Strangefolks” radiates an abject anxiety that is the national mood these days. We’ve had a pretty crappy millennium so far: September 11, wars in Afghanistan and Iraq (the latter hits its fifth anniversary in March), torture carried out in our name, a steady thumping of terrorist attacks abroad, Hurricane Katrina, global warming, and lately the mortgage crisis and threats of a looming economic recession. All this gloom and doom has burrowed down deep into our common dreams, mutated, and burbled back up in art as disconcerting symbols and off-kilter apocalyptic allegories.

Goth gloom is, of course, entertaining no matter the occasion, and at this particular juncture it feels apt and meaningful as well. But what makes “Strangefolks” an extra thrill is all the big, fresh, juicy painting going on here. 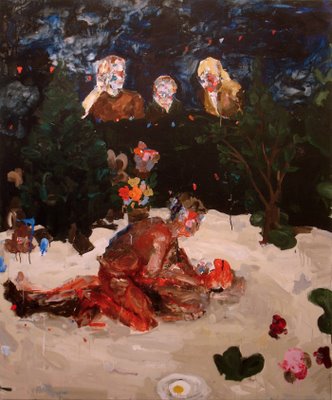 Pictured from top to bottom: Elizabeth Huey, “There’s a Boarded Bird Chirping Way Past Two,” 2008; John Copeland, “Your Eyes Are So Peaceful, but Your Hands Want More,” 2007; and Logan Grider, “Media Coverage,” 2007.