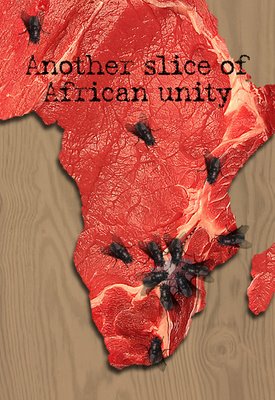 Here are a couple of recent broadsides about the turmoil in Zimbabwe by Chaz Maviyane-Davies, a Zimbabwe-raised, Boston-based graphic artist. His work is featured in “Reflections in Exile: Five Contemporary African Artists Respond to Social Injustice” at the Museum of the National Center of Afro-American Artists in Roxbury.

I’ve included his commentary below:

“Flies”
The African Union's total failure to collectively condemn Mugabe's farce in the face of a world gutted by his vindictive arrogance, yet again defies belief.

I ask them this in layman's terms: What if your boss killed your wife and children so that he could keep his job, would you be talking about a merger then?

In a related article: http://www.guardian.co.uk/commentisfree/2008/jul/02/zimbabwe


“The Human Stain”
In an attempt to cow and intimidate people into voting, Zimbabwe's state security agents had launched “Operation Red Finger” to identify if people had voted by checking if they had indelible ink-stains on their finger. Those who had not voted could be beaten and forced to do so. 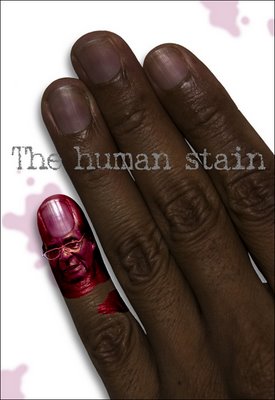