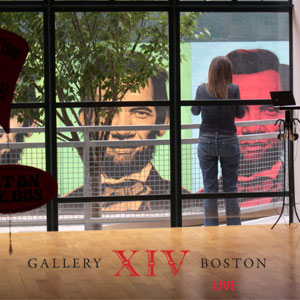 Kerr says he plans to move out “as soon as possible, by the end of August if we can. We’re bankrupt. We got zero [financial] support from Boston.”

But he adds, “We’re definitely not closing. We’re just not carrying on our lease at that space. … Gallery XIV has too much momentum to fade away.”

This would make it at least the 11th Boston-area gallery to shutter since March. Closed (at least temporarily) are: Allston Skirt, Bernard Toale, Space Other, Rhys, Judy Ann Goldman, Pepper, MPG Contemporary, artSPACE@16, Julie Chae, and Beth Urding. Some additional galleries are restructuring.

Gallery XIV, which opened last fall, has struggled to generate sales. Kerr, an painter himself, says he stopped renting a studio for his own art and sold his car to help afford the gallery’s rent.

The gallery primarily exhibited realistic or fanciful painting, and some sculpture. In the spring, it tried to reach out with public talks and a community-building event and exhibition called “The Canvasation Project,” which invited groups of artists to team up to paint canvases together (the results were rudderless mishmashes). But the current exhibit, “A politic," showed the gallery beginning to find its footing with a politically-themed group show and English’s mural. “Abraham Obama” (and smaller versions of the poster illegally plastered on private property around the neighborhood) attracted prominent media attention – including mentions in the Wall Street Journal, Boston Globe, Boston Phoenix (by me), and WHDH Channel 7 television news. Street art (and I don’t mean this as an endorsement of vandalism) seemed a promising aesthetic and financial direction for the gallery.

But all the attention did not alter the immediate hard fiscal reality. Kerr says of the current exhibit: “For this whole show, the gallery has made something like $300.”

“You walk around on First Fridays,” Kerr says, “and you just think it’s a healthy vibrant scene. And it is. But it’s not a healthy vibrant market. … I think everyone’s closing for the same reason – it’s money.”

He hoped an auction of the “Abraham Obama” mural would keep the gallery financially afloat through the fall. But he says that after someone(s) plastered street art posters on the mural last week the auction fell through. “They ended up really pissing off Ron [English]. And the investors, the auction participants, pulled out,” Kerr says. If so, it’s a sadly ironic what-comes-around-goes-around turn of events.

Kerr says he hopes to present the gallery’s current show, “A politic,” at the Massachusetts State House after he moves out of Harrison Avenue and he’s looking into opportunities to curate in New York and Europe.

Photo above by William Kerr.