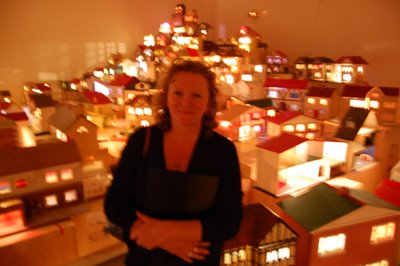 Here are some comments Rachel Whiteread (in blurry photo above) made when I spoke to here at her show at the Boston Museum of Fine Arts on O ct. 14, 2008:

“I started collecting them [dolls’ houses] over 20 years ago. I had no idea whatsoever where they were going. I just started picking them up in flea markets and stuff. It was completely connected to everything that I’ve always done. It was to do with the interiors of them, and opening the doors and seeing these strangely decorated landscapes that were people’s ideas of what the perfect house would be. And their kind of strangeness of oversize wallpaper – the scale of the wallpapers was directly related to the suburban house they lived in, and they just kind of put the scraps in the doll’s house, and bits of carpet and stuff. So they were little versions of mini-me, the people that had made these. And then they’d been passed down through generations and then eventually just spat out somewhere for me to collect.” 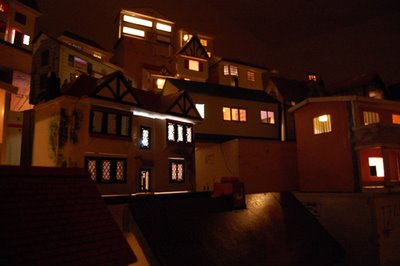 “You’re outside, but they’re lit so you can go in. ... Someone asked me earlier, ‘Why aren’t the lights on in the room.’ I said, ‘Well, you know, I’m trying to create a bit more poetry than that.’ I like the idea of lighting the insides. It then made it sort of possible to inspect the inside.”

“I was collecting more and more of them. They were just kind of going in my studio [in East London], on shelves and things. And I think I got to a point where I was seriously thinking about trying to make something with them. And I was asked to do a show in a museum in Naples, called the Madre. And that was the first unveiling of them. It was to do with, in Naples they have this history of the presepis, the Nativity scenes. … Also thinking about Pompeii and thinking about Herculaneum and the sort of archaeologically historical places in Naples. All of those things came into mind.” 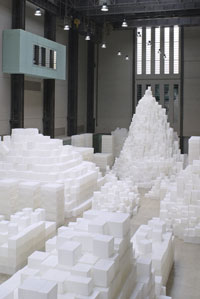 “Two years ago I kind of figured out what I was going to do with the piece. And there was a much smaller version which was in Naples, it was around 60 dolls’ houses. This is over 200.”

“I’d made ‘Embankment’ [shown at left at the Tate Modern in 2005]. There were a number of pieces previous to making this where I was sort of using a germ from those to be able to put the piece together.”

“It’s just the language quite simply that I’ve developed over time. It’s the stuff that obsesses me. Places and spaces that have been touched by humanity and somehow helping to draw that out again and make it speak.”

“There’s always a sense of loss, especially with something that’s second-hand, and a lot of the things I’ve used are second-hand so they have a sense of past lives always attached to them.”

All photos by The New England Journal of Aesthetic Research, except the image of "Embankment," which was by Marcus Leith for the Tate. 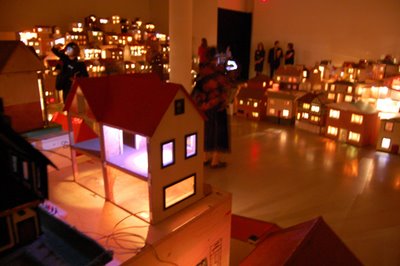