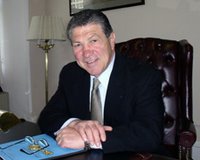 Massachusetts State Auditor Joe DeNucci (left) alleged Monday that the Massachusetts Cultural Council “improperly kept $826,103 in state funds” when a project to fund cultural facilities projects sputtered. The state cultural council responded Monday with its own press release saying, “There is no evidence in the audit to indicate that MCC has done anything other than responsibly and in good faith make prudent use of taxpayer dollars.”

DeNucci said the funds in question were part of a $1.5 million fund originally earmarked by the Legislature to provide loans and grants to non-profit cultural organizations for facilities projects across Massachusetts. MCC had entered into an agreement with two non-profit organizations to administer the fund. However, citing budget cuts, the Cultural Council discontinued that agreement five years ago, at which time DeNucci said the original $1.5 million should have been returned to the state.

Instead, MCC entered into an agreement with one of the non-profits – the New England Foundation for the Arts, Inc. (NEFA) – to act as its fiscal agent and retain and invest the loan funds that had either been repaid or were in the process of being repaid by the cultural groups. DeNucci said the Cultural Council used nearly $500,000 of these funds to pay for discretionary expenses that included software improvements, creation of an on-line cultural “marketplace,” documentary film, exhibitions and equipment purchases.

“This was a clear example of a legislative earmark being used for purposes unrelated to the original appropriation,” said DeNucci. “Especially in these very difficult fiscal times, state agencies must make sure that every dollar is spent legally, wisely and only for the purposes intended.”

You can read DeNucci’s entire press release here. The entire 32-page audit, “Independent State Auditor's Report on Certain Activities of the Massachusetts Cultural Council, July 1, 2005 to June 30, 2006,” which provides a dry, but fascinating window into the workings of the MCC, is here. (Both are pdfs.)

Below is the MCC’s response:

* The funds at issue in the auditor's report were appropriated by the Legislature to provide technical assistance, grants, planning services, and loans, to nonprofit cultural organizations for facilities projects in Massachusetts.
* The funds were granted for just this purpose starting in 1995 by the MCC to the Massachusetts Cultural Facilities Project, a legal partnership between the New England Foundation for the Arts (NEFA) and the Nonprofit Finance Fund.
* The Massachusetts Cultural Facilities Project ran for eight years.
* When the Project ceased to operate, the MCC sought to have the remaining funds returned and put to public use.
* The MCC sought and received legal counsel regarding appropriate administration of the funds.
* The MCC was advised that the funds should return to the original grantee, NEFA, but could only be expended by formal approval by the MCC board to assure that the disposition of the funds were prudent, legal, and transparent.
* The funds were subsequently spent in accordance with this process.
* The MCC has responded to all issues raised by the Auditor.
* The MCC concurs with the auditor that it is advisable to seek additional counsel on the administration of the funds from the State Comptroller and will do so.
* There is no evidence in the audit to indicate that MCC has done anything other than responsibly and in good faith make prudent use of taxpayer dollars.

MCC's full, detailed response is included in the audit report that accompanies the press release issued by the auditor.