Gloucester monument to back MA quarter 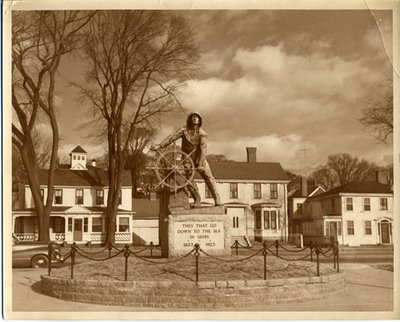 Gloucester’s Fisherman’s Memorial has won the popular vote to be the site featured on the back of the next Massachusetts quarter, Governor Deval Patrick announced (on his Twitter feed) today.

The quarter program continues from the U.S. Mint’s decade old 50 state quarters project. Beginning in 2010, they’re going to produce a new series of state quarters featuring national parks and other national sites across the country based on recommendations from the governors of each state.

Patrick put it up to an online vote – and reports receiving 245,000 responses. The three runners up to the Gloucester memorial are the Lowell National Historic Park, the House of Seven Gables in Salem, and the U.S.S. Constitution. If the Mint decides that the Fisherman statue can’t fulfill its duties on the back of the coin one of the others may replace it – for real.

The Fisherman’s monument – sculpted by Leonard Craske and cast in Providence in 1925 – notably represents both Gloucester’s fishing and artistic history. As I’ve said in the past, it’s one of the most successful pieces of public art in the region – or anywhere. The sculpture itself is okay – a traditional realist monument depicting a fisherman at a ship’s wheel facing out to sea, with the inscription “They that go down to the sea in ships, 1623-1923.” But, located on the city's waterfront, it directs our gaze out to sea, we are on the ship with the man. It has come to serve as a place of public remembrance – where lives lost at sea are recalled, and annual community memorial events are held. Tourists come just to see it. And it has become a landmark and a symbol embodying Gloucester. A rare feat for any public art.

The new quarters are scheduled to be released beginning in 2010, approximately one every 10 weeks, in order of when each site was first deemed a “national site.”

Antique photos of the Fisherman’s Memorial (I’m not sure of the dates, but a note on the back of the bottom one puts it as May 12, 1948) generously gifted to The New England Journal of Aesthetic Research by the very kind Sara Favazza of Gloucester. 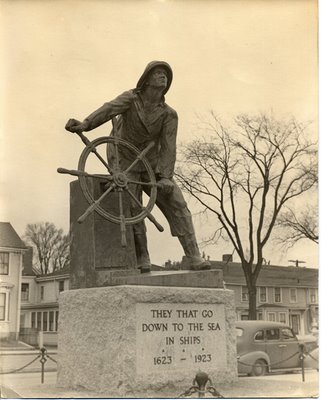