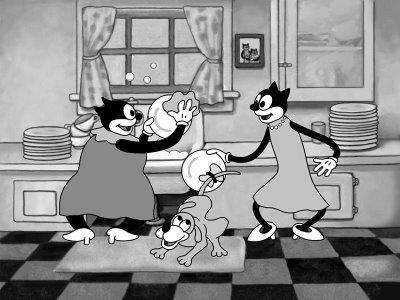 From my preview of “Waltz with Bashir” art director David Polonsky’s talk at RISD and the Festival of Contemporary Animation at Rhode Island College:

There are moments when, by coincidence or an aligning of the stars, something amazing accidentally comes together. Here in Providence, next week is one of those times, as two complimentary events combine to create one of the finest showcases of contemporary animation that you'll find anywhere in North America this year. And it's all free.

David Polonsky, art director of the animated documentary “Waltz with Bashir,” will give a talk about the making of the film at the RISD Auditorium on April 13 at 6:30 pm. Rhode Island College then rounds up notable international and local cartoons for its Festival of Contemporary Animation on April 17 and 18 at Sapinsley Hall.

“Waltz with Bashir,” which won the Golden Globe for Best Foreign Language film in January and was nominated for the Academy Award in the same category, tells of director Ari Folman's efforts to recall his experiences as an Israeli soldier during the 1982 Lebanon War — and in particular the massacre by Israel-allied Lebanese Christian militias of thousands of civilians in a pair of Beirut refugee camps surrounded by Israeli troops. "The Israeli army almost knowingly allowed the Christian Phalangists to do that," Polonsky tells me. "Not enough was done to stop the massacre. It's a very sore spot in the Israeli consciousness.

David Polonsky, art director of the animated documentary "Waltz with Bashir," gives a talk about the making of the film at the RISD Auditorium, 17 Canal St., Providence, at 6:30 p.m. April 13.

Pictured above is Providence animator Lorelei Pepi's film in progress Happy and Gay. Pictured below are samples from two films expected to be screened at the animation fest: Takeshi Murata's "Untitled (Pink Dot)" and Laura Heit's "Look for Me." Watch more previews of festival films here.