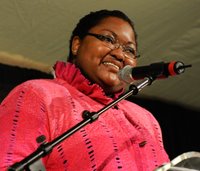 Wyona Lynch-McWhite (pictured at left) has been named executive director of Fuller Craft Museum in Brockton, Massachusetts. She is expected to begin the new job on July 1.

She fills the shoes of Gretchen Keyworth, who will take a summer sabbatical before returning to the museum as director emeritus and chief curator.

Lynch-McWhite has been the museum’s deputy director since last year. Previously she was director and chief curator of the Eleanor D. Wilson Museum, the art museum of Hollins University in Roanoke, Virginia, and worked at the Art Institute of Chicago and the Museum of Contemporary Photography in Chicago.