Plus museum changes name to "DeCordova Sculpture Park and Museum" 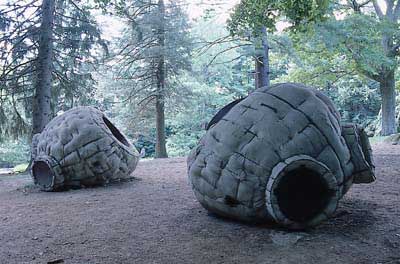 The DeCordova Museum in Lincoln announced the formation last week of a new endowment to fund its sculpture park – and a $1,000,000 gift from the Parker Family Foundation of Lexington, Massachusetts, to kick it off. The DeCordova Museum and Sculpture Park added that it is changing its name to “‘DeCordova Sculpture Park and Museum” to reflect its renewed focus on the 35-acre outdoor sculpture park. (Though the website still has the old name.)

DeCordova Executive Director Dennis Kois has smartly made the museum’s 35-acre sculpture park, a neglected DeCordova resource, one of his primary focuses since joining the museum last June. (The schedule of exhibits for the next several months also seems to suggest sharper, catchier programming.) Kois has identified sculpture as niche the museum could fill both locally and nationally because, in part, there are still few major institutional players devoted to sculpture across the country.

A potential hurdle has been that sculpture – making it, shipping it – is often pricey. The formation of the endowment and securing this gift suggests that even in a down economy Kois may be able to raise the funds to make his plan a reality.

The musem reported that four new works are being installed in DeCordova’s sculpture park this summer: a sculpture by Douglas Kornfeld; a never-before realized iteration in Sol LeWitt’s concrete block sculpture series which will be constructed in July; an environmentally responsive site-specific work by Steven Siegel that will make use of an antique barn foundation in the park; and a “research station” built by the artist team of Bartow + Metzgar, who will begin a year-long residency interacting with park visitors that will culminate in a 2010 gallery installation.