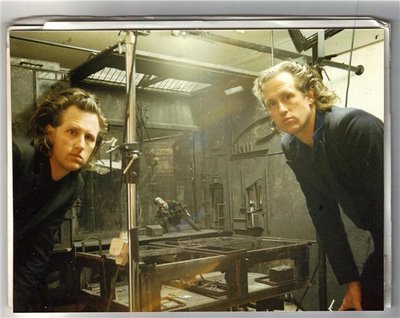 I recently phoned the Quay Brothers in London on account that they will be visit ing Brookline's Coolidge Corner Theatre next week to screen and discuss excerpts of their films, and to receive the 2009 Coolidge Award. There's also a month-long exhibit of their animation sets. They told me:

"Having grown up in America, we would not have gone the route of Disney and the cartoon as comedy and entertainment. We [instead] felt [animation] had its roots in fairy tales, blood, Brothers Grimm on a more savage level, psychosis, sexuality. That became territory we felt puppets had not quite charted. And that's something we wanted to do. You know, in a quiet way."

The Quay Brothers visit Boston's Coolidge Corner Theatre on May 6 and 7, 2009. "Dormitorium” a companion exhibit of Quay Brothers animation sets is at The Fourth Wall Project, 132 Brookline Ave., Boston, from April 30 to May 21, 2009.