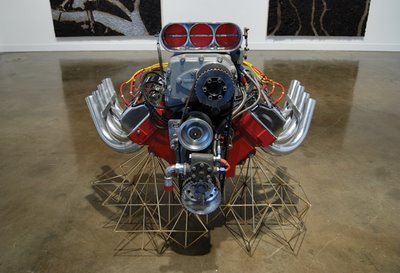 From my review of Matthew Day Jackson’s “The Immeasurable Distance” at MIT’s List Visual Art Center:

Jackson's interest in Americana turns out to be specific: middle-class American guy taste. He presents a heavy brown spacesuit pinned high on the wall by a wood plank, video of models of the nukes we dropped on Japan at the end of World War II falling forever through a wind tunnel, photos of mountains in each of the lower 48 states that people think look like men's faces, aerial views of Hiroshima and Washington, DC, rendered in lead and burnt wood. He commissioned drag-racing legend "Big Daddy" Don Garlits to build an engine for him; it stands on its own in the middle of the room like a shiny chrome god.

Read the rest at the end here.