A correction to yesterday's Globe article 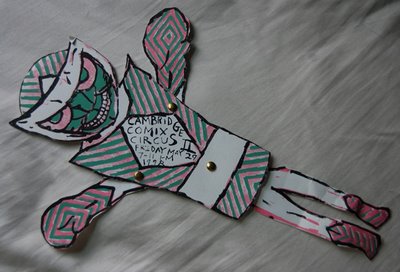 In the 1990s, Boston and Providence were hotbeds of a mutant blend of comics, pop and fine art that became known as Lowbrow art, but The Boston Globe’s article yesterday demonstrates again how the Boston art scene missed it – and missed it so completely that articles like this continue to be published in total ignorance of what happened.

“Lowbrow” as a title conjures up a certain West Coast brand of this stuff – which tends to be laid back, slacker, mid-century Modern and hot rod cool. But Lowbrow is actually a national phenomenon – really international (see all the pop cute art coming out of Japan). The style is varied, a bastard child of comics, illustration, animation, street art, B movies, video games and vernacular pop design (like hot rods). It sprouted in Seattle (fostered by the alternative comics publisher Fantagraphics Books), Philadelphia, New York, Chicago, LA, San Francisco … and New England.

The reason California tends to get the credit is that Robert Williams and friends there were smart enough to start a magazine, Juxtapoz, to celebrate and promote this stuff. And San Francisco, LA and the like were savvy enough to launch galleries selling this stuff and helping satisfy an international craving.

You could just as well trace Lowbrow's origins to, say, Chicago, which spawned a whole art movement – variously called Hairy Who and Chicago Imagism – in the 1960s and ‘70s that was inspired by comics, folk art, outsider art, and pop culture. Many of these artists went on to teach at the Art Institute of Chicago, where they created a force field that allowed such art to continue to flourish. The Chicago style and subsequent Lowbrow art can be seen as pop art in which artists explore a cartoony style as a language in and of itself, rather than New York-style pop, which was about quoting (you might call it plagiarizing) stuff directly from pop culture.

But the roots of this style in the U.S. go back even further to Modernist expressionist art – which tended to flourish outside New York. In the early 20th century, the New York art scene – which because of its dominance is taken de facto as the “American” art scene – drew its influence from and focused on French Modernism. In particular, the New York scene moved more and more toward abstraction. Artists in Boston, Chicago and elsewhere drew influence from German Expressionism – which favored an exaggerated moody realism. But because they weren’t following New York’s march toward Frenchy abstraction, this work disappeared from the mainline American art history narrative. (As an aside, this is why you can find lots of French Modernism in New York museums and practically no German Modernism there. To find the German stuff, you have to go to places like Harvard’s Busch-Reisinger Museum or the St. Louis Art Museum.)

In the 1980s and ‘90s, Massachusetts art schools discouraged and frustrated artists who pursued pop, cartoony, illustrationy art – the stuff we now call Lowbrow. Still by the ‘90s, Boston and Providence were becoming nationally influential for artwork that stood at the arty end of comics or the comicy end of fine art, depending on your perspective.

In Boston, these artists clustered around Tom Devlin’s art comics publishing house, Highwater Books, which helped lay the groundwork nationally for a more artistically ambitious, more abstract cartoony style printed in beautifully designed art books. Devlin published folks like Ron Rege Jr. (then) of Cambridge, James Kochalka of Vermont, Megan Kelso (then) of Seattle. Other locals in its orbit were Jordan Crane, Jef Czekaj, Ben Jones of Paper Rad, Dave Gavril, P. Shaw, Dave Kiersh, Dan Moynihan, Craig Bostick and, uh, me. (I’m certainly forgetting someone in these lists of artists – which you might say boosts my argument. I’m sorry for any omissions. Please note people I missed in the comments.) In Boston, Devlin helped organize exhibitions at the Washington Street Art Center in Somerville and Comix Circuses in Cambridge (see puppet-poster above by Brian Chippendale).

Devlin also published folks from Providence’s Fort Thunder – Mat Brinkman, Brian Ralph, etc. – and distributed their self-published minicomics. (He tried to publish a book by Brian Chippendale, but never quite got it together so later it was published by New Yorker Dan Nadel’s PictureBox.)

But Boston art folks missed it. Lowbrow was – is – here, it just wasn’t part of Boston’s official fine art scene. You might say it was a true alternative, underground movement – so underground that the Globe and Boston art scene missed it then, and miss it now.

Coming soon:
As a follow up to this post and to my review of "Book as a Post Modern Medium" at 5 Traverse in Providence, I'll soon post images of some of the art comics produced by the folks mentioned above.

Elaine and I lived in San Francisco before moving to Boston. When Elaine was accepted to the Museum School in 1991 I did not look forward to leaving San Francisco. The only thing that gave me some ease about the move were three books, Cave-In, Catch If Catch Can, and Skibber Be Bye, And that they were published in Cambridge, Mass. "Maybe I can hook up with these guys and draw comics with them.", I thought.

Interesting post--I'd like to read more. Just a thought: shouldn't any argument for a distinctive New England lowbrow with its own history have a place for The Mad Peck? I've never looked into any direct link to the 90's and later stuff you're talking about, but he's a pretty significant precursor, at the very least. Interesting that this page hosting some of his strips from Creem is associated with an LA radio show. It's a lead into another related area, trash rock and that whole aesthetic, etc.

Mad Peck certainly deserves mention here. And is someone I need to focus on in depth sometime. Sorry for the omission. And thanks, JL, for the reminder.