Brandeis’s Rose Museum: Where to go from here? 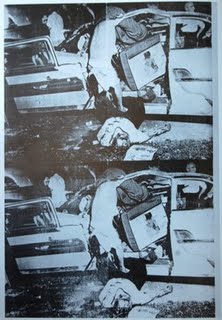 With the announcement of Brandeis President Jehuda Reinharz’s resignation and the release of a Rose advisory committee’s final report last week, it’s time to look at where to go from here.

1. Brandeis Board Chairman Malcolm L. Sherman should depart too.

When Brandeis University announced plans in January to close its Rose Art Museum and pawn its collection, it immediately set up a question of which would go first: the Rose or Brandeis leaders pushing the death-to-the-Rose policy? Because you can’t just fight a toxic policy, you have to fight the people backing the policy. As long as they remain in power you don’t know if their plan is actually defeated or just dormant.

So Reinharz’s slo-mo resignation (he won’t be leaving until the end of the school year, at the earliest) is a victory for those working to preserve the Rose and its collection. But it’s just a first step, because the board and everyone else who backed the policy remains in place. And they don’t seem to have changed their minds. The board loudly proclaims its intentions with what the school calls an “unprecedented vote” to keep listening to Reinharz's advice even after he quits.

If that’s their plan, then Sherman must go too. The move would be symbolic as well as practical. He’s the guy who turned his experience running the Zayre discount retail chain into the ground in the 1980s into a lucrative career as a business crisis manager/liquidation specialist. Not the sort of guy you want safeguarding an irreplaceable art collection.

2. Brandeis must promise – in writing – to not sell off the Rose’s major treasures. Because what is a museum that sells off the treasures it was built to museum? It’s an untrustworthy institution and a failure because it doesn’t fulfill its fundamental purpose. And besides, Brandeis leaders have not demonstrated that this is the sort of do-or-die situation that requires the sale of legacy capital assets to fund operating costs.

Brandeis leaders have backpedaled from their January plan to “sell the art collection.” Now they’re considering selling just “some artworks if necessary.” Most threatened are the most treasured works since in this case they mostly correspond to the biggest potential price tags.

Many observers rightly complained that the report released last week by Brandeis’s Future of the Rose Committee sidestepped the issue off the sale of artwork – though this was not news as the committee announced it would do just that in the spring.

3. Brandeis should adopt the recommendations in the Future of the Rose Committee report to (a) maintain the museum as it was and to (b) better integrate it into the educational mission of the school. The report calls for a return to pre-Rose-crisis staffing levels to achieve these goals – from supervising interns to developing Rose-related curricula.

“Announcements will not be enough,” the report correctly notes. “Some will be suspicious about the University’s intentions no matter what the Administration announces; we hope that the University will quickly embark on the constructive steps for reinvigorating the Rose that we recommend throughout this report and put such suspicions to rest.”

The committee has produced a thoughtful and levelheaded report. But when the committee announces “our intention has been to use this opportunity to rethink the role of the Rose with the intent of strengthening it” remember that the Rose was attacked because it has major assets, not because it was poorly managed. But the attack has now become the impetus for a management critique and eating into the Rose’s autonomy. You can’t help wondering if, say, there will be a similar call for a mathematics class to be sent out to the athletic fields during games to develop wall labels and iPod commentary that address the question “Is Soccer Math?”

The report reveals an alienation of Brandeis academic departments from the Rose. The alienation likely reflects a mix of long-held views and the piling on that’s common when people/departments are under attack. The divide between the Rose and other Brandeis departments has not been helped by a “perceived competition for donors” observed by the committee.

Rose leaders were shortsighted in not recognizing and addressing this alienation. They didn’t take advantage of faculty talents – rarely inviting faculty to help curate or even consult on exhibits. “The Rose has sponsored one short-term faculty group exhibition during the past fourteen years,” the report notes. And no Rose director, it adds, has taught a Brandeis course since the departure of Carl Belz “over a decade ago.”

There is at least one flaw in the report’s observations (as differentiated from analysis). It says, “A greater effort should be made to have major representatives of the permanent collection on view regularly albeit on a rotational basis if necessary.” It’s a no-brainer recommendation, and would help enlarge the constituency for the threatened collection. But it shows that people haven't been following the Rose, because more than half of the Rose’s exhibits since ousted Rose Director Michael Rush arrived in December 2007 has been from the collection. Andy Warhol’s 1964 painting “Saturday Disaster” (pictured above), which is perhaps most in danger of being sold, was rarely off the walls during Rush’s tenure.