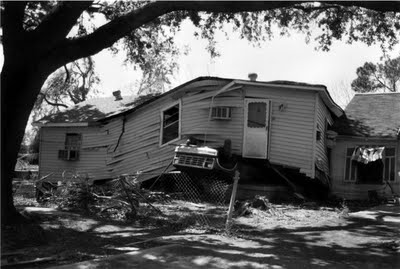 From my review of "Katrina, Katrina” at various locations around Brown University:

Brown University marks the fourth anniversary of the devastation wreaked upon New Orleans by Hurricane Katrina and "heck of a job" government rescue and recovery efforts with "Katrina, Katrina," a series of talks, screenings, performances, and exhibits across campus through September 30. Hopefully the events aren't as halfassed and lame as the exhibits.

The best display is "6 Months After," Brown undergrad Ian Sims's photos of New Orleans half a year after Katrina, on view at the Rockefeller Library (10 Prospect Street) and Hillel Gallery (80 Brown Street). But his shots of debris-strewn streets, soggy ruins, clean-up crews, protests, and parades are interesting primarily as records of data. Sims is still developing his technique (prints are blurry) and his eye. But by going to New Orleans, he demonstrates one of the keys to good photography: get yourself to the right place at the right time.

Read the rest here (halfway down).