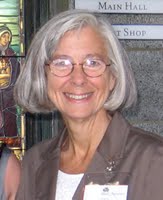 Peggy Baker, the director of the Pilgrim Hall Museum, plans to retire early next year after leading the Plymouth institution for 15 years. She previously served as its curator of manuscripts and books for four years. Her most visible accomplishment was spearheading a $3.9 million renovation and 1,200-square-foot expansion of the museum, which opened in spring 2008. The effort included winning a $300,000 National Endowment for the Humanities grant in 2006.

“After 15 years I had a vision and accomplished it. Now is the time when it works for me and the [Pilgrim] Society to step apart and find fresh vision,” Baker tells me. Then quips, “And I’m old.”

Her husband, James Baker, is also retiring – from his job as curator of the Alden House Historic Site in Duxbury, which he helped get named a National Historic Landmark last November.

Peggy Baker says the Pilgrim Hall Museum building project was an outward manifestation of a greater change at the institution. “The big accomplishment is more internal: The board and I taking an institution that had been inward-turning, stern, not particularly welcoming to visitors and making it a vibrant place. … We were not fulfilling our mission of telling our story and caring for the artifacts. And we have certainly changed that.”

The signs are a complete reinstallation of the permanent collection in the new building with up-to-date scholarship that Baker believes makes the artifacts more relevant to today’s visitors. The renovation and expansion included air-conditioning the 1824 hall as well as the new structure to better preserve the collection. And the building project allowed the institution to offer universal access for the first time – to get in the front door, and an elevator for getting about inside.

Baker says she’s not sure what she’ll do next. “I’d love to stay in the field of history,” she says, imaging herself perhaps busy at a local historic house. Time will tell. 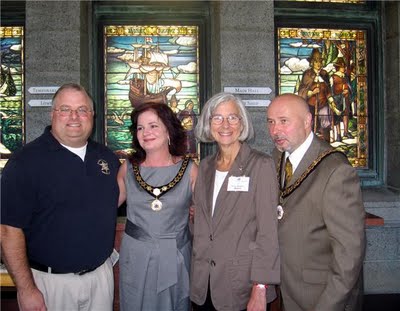