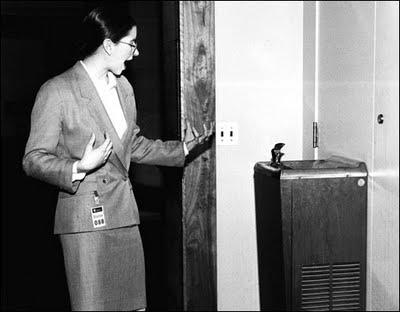 From our review of "Andrea Fraser: Boxed Set" at Harvard University's Carpenter Center:

Fraser is one of the leading lights of a type of postmodern art dubbed "institutional critique," which asks pesky questions about the traditional white, male hierarchy of Western art.

The five videos here, each running about a half an hour, begin with mock museum tours from 1989 and '91. "The museum's purpose is not just to develop an appreciation of art but an appreciation of values," Fraser says in 1989's "Museum Highlights: A Gallery Talk." But what values?

Fraser presents museums as monuments to wealthy patrons that were built and managed by the patrons' cronies. "They were always eager to do their best for their native city," she proclaims with the cheery blandness of a newscaster in "Welcome to the Wadsworth" (1991), a monologue she performed outside Hartford's Wadsworth Atheneum. Then she veers into rants: "Mankind would have been better off if they never left their farms. . . . We have a moral obligation to have beautiful homes. . . . A city is not intended to be a reservation for unproductive people."