The Institute for Infinitely Small Things 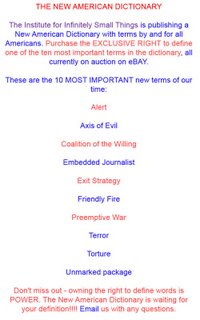 The Institute for Infinitely Small Things’ latest project is “The New American Dictionary (Security/Fear Edition)," in which they’re auctioning off the “exclusive right” to redefine some of the most frequently used words and phrases of the War on Terror. It’s part of an online art exhibition called ebayaday.

The Institute plans to print up the results in a new dictionary, their “compilation of new terms by and for Americans in the new millennium.” The art collective notes, “This dictionary is uniquely democratic: YOU get to define the most important new words in it by purchasing them on eBay!”

The Institute’s main focus has been investigating and interrogating slogans and names, whether they be corporate ads or the name of every single place in Cambridge. At root, they ponder the power of words, of naming, of being able to define the terms of discussion. And they point out how in our capitalist society, money and spending have become a central part of our definition of democracy.

So it was only a matter of time before they took on the Bush Administration’s mastery of semantics – or, more specifically, subversion of semantics. The result is pointed political commentary cloaked as absurdist joking.

The most touchy word up for redefinition is “Torture” -- a direct challenge to the Bush Administration’s assertions that torture is abhorrent to American laws and values while simultaneously narrowing its definition of torture solely to acts that cause “organ failure, impairment of bodily function, or even death.” At a talk at Harvard on Nov. 30, Instituter Savic Rasovic said, “If we live in a society where a bunch of lawyers can get together and redefine torture … why not sell it to the highest bidder?”

Through Christmas day, there’s also the chance to redefine “Alert,” “Axis of Evil,” “Coalition of the Willing,” “Embedded Journalist,” “Exit Strategy,” “Friendly Fire,” “Preemptive War,” “Terror” and “Unmarked Package.” A most important and most debated word noticeably absent from this list of what the Institute calls “the 10 most important new terms of our time” is “Victory.”