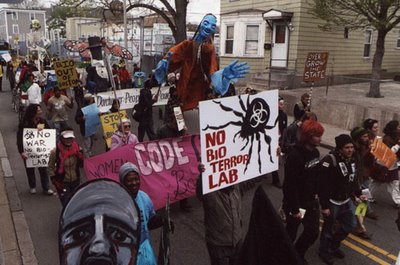 Bread and Puppet Theater, the landmark political protest theater based in Glover, Vermont, was at the head of a march through Boston’s Roxbury and South End neighborhoods on May 6, protesting a high-security biolab for studying extremely deadly germs that’s under construction at Boston University Medical Center on Albany Street in Roxbury. (It’s right behind Boston's South End arts district.) 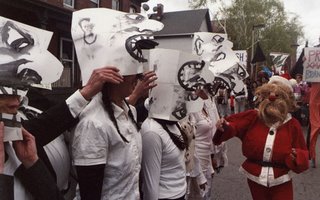 Bread and Puppet’s street theater action, performed over and over during the march, consisted of businesspeople led by Santa Claus pulling paper masks over other performers’ faces. Then these folks walked about like stiff-jointed robots, while the businesspeople opened their briefcases to display charts of skyrocketing profits. But the robot people revolted, pulling off their masks, throwing them to the pavement and stomping on them. 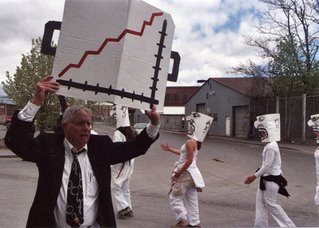 Putting it into words it sounds pretty straightforward – people under the spell of big business and Santa (think capitalist greed) come to reject these forces – but on the street it felt strange and nonsensical and not specific to the day’s theme. Bread and Puppet founder Peter Schumann (here playing the straw-masked Santa) has struggled with his metaphors of late.

I don’t mean to overemphasize Bread and Puppet’s role in the event, they were just one part of the group involved (the Globe report put participants at about 150). 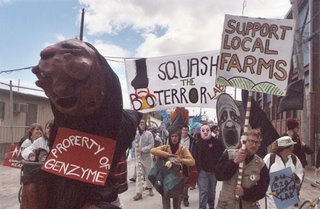 But there were many Bread and Puppet-style costumes and giant puppets in the march – the “Property of Genzyme” mutant, the big blue person, the giant skeleton. For most part these weren’t directly affiliated Bread and Puppet, though many were operated by Bread and Puppet alums. It was more a sign of the influence Bread and Puppet has had on protest style, particularly in New England, since it formed in New York City in the 1960s. 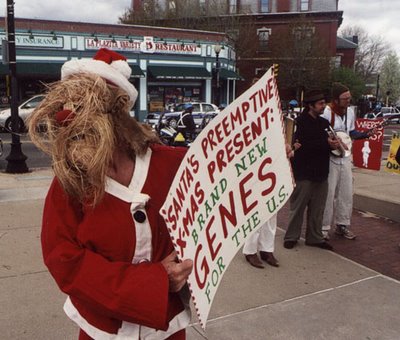 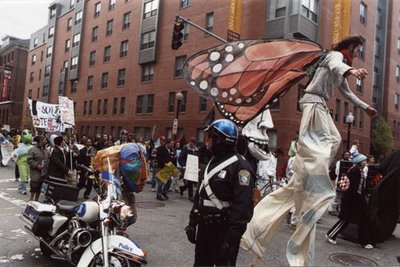 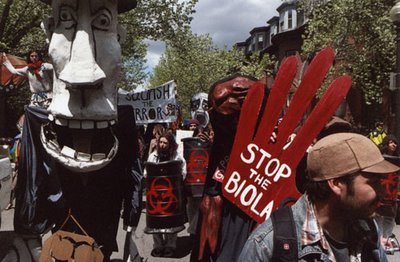 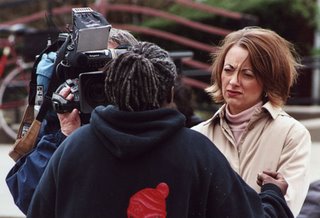 Oh, this final photo shows local protest organizer Klare Allen of SafetyNet being interviewed before the march began by a television reporter. I just love the expression on the reporter’s face – it was the expression she wore the whole time.