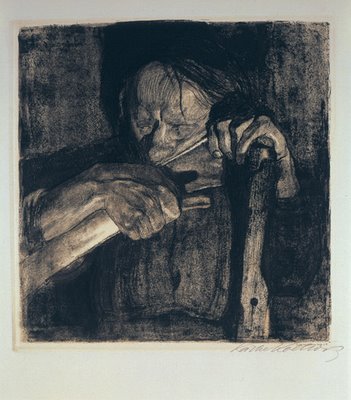 The Portland Museum of Art’s current exhibit of Käthe Kollwitz’s prints, which I review here, focuses primarily on the great German political artist’s early etchings with which she made her reputation.

In her 1903 etching “Outbreak,” the revolutionary leader Black Anna waves a motley mob of peasants with pitchforks on to battle in a 14th-century uprising against wealthy landowners. "Käthe once told me that she had portrayed herself in this woman," Otto Nagel wrote in his biography of Kollwitz. "She wanted the signal to attack to come from her."

Examining Kollwitz’s life (1867-1945), I’m struck by a woman who grew up craving a socialist revolution, but wound up stuck in the mess of World War I and World War II.

Pictured from top to bottom: "Whetting the Scythe,” 1905, etching with aquatint and some traced lines on paper, and “Self-portrait,” 1934, lithograph. 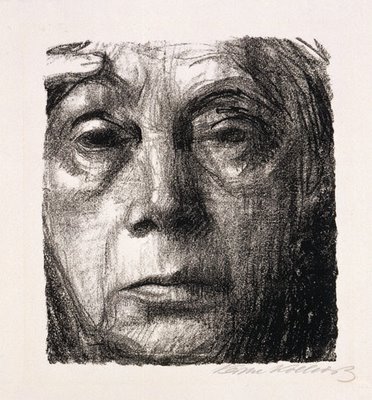