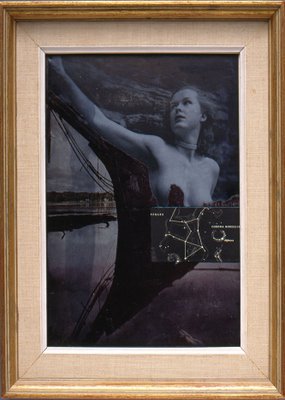 One of the striking things of the Joseph Cornell retrospective at Salem’s Peabody Essex Museum is the sexy collages and boxes he began making in the late 1950s with photos of naked ladies clipped from National Geographic, Playboy and art photography journals.

It's striking because Cornell (1903-1972) is often described as a chaste fellow, an impression promoted by a tale he liked to recount of the time in the 1920s when he tried to make the moves on a cashier who sold tickets in the booth in front of a Queens movie theater. Too shy to actually approach her, he threw a bouquet of flowers to her. Fearing she was being attacked, she screamed, and the manager ran out and tackled Cornell. 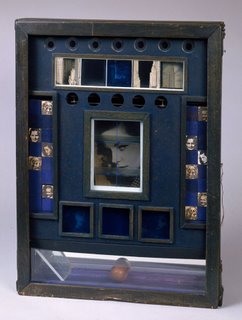 “Untitled (Ship with Nude),” pictured above, from around 1965 is among the more modest of his nudes. I don't have any pictures of the real salacious ones, but one features a nude from behind, snipped in half, and pasted into a photo of autumn trees. Another shows a naked lady laying on her side in ocean surf. Cornell added only a little star to her necklace and a bit of ink wash.

Deborah Solomon’s exhaustive and exhausting 1997 book “Utopia Parkway: The Life and Art of Joseph Cornell” reports that late in life Cornell hired pretty young assistants in hopes of sparking "office" romances. This tactic finally paid off when he hired the Japanese artist Yayoi Kusama, then in her mid 20s, to model for figure drawing practice in 1964. Solomon reports she

was happy to disrobe in his basement workshop so that he could sketch her. … Yayoi was the hardly the first woman whom Cornell envisaged as his feminine ideal.

Yet she was the first to harbor any sensual interest in him. … She encouraged him to act on his impulses and apparently gave him his first true taste of sexual bliss. He was sixty years old, and finally, at last, he kissed a woman on the mouth and explored a woman’s body with his hands, an experience he described in his diary as gratifyingly “erotique.” … “Cornell was deeply impotent,” Kusama noted. “To have sex with him, therefore, was impossible." (pages 293-294)

Solomon also reports Cornell’s circa 1971 liaison with the writer Leila Hadley, a twice-divorced mother of four, “a radiant and spirited young woman in her thirties. A small, alluring beauty with long brown hair.”

She felt honored to be the object of his desires, and it did not bother her that his needs were unconventional. On one of her visits, Cornell requested that they take a bath together, and she obliged. On another occasion, she treated him to oral sex, reporting years later that he was “fully capable of having an orgasm.” Nonetheless, Cornell had no intention of consummating their relationship the conventional way. He apparently remained impotent, which is to say, incapable of penetration. … Though he recorded “wet dreams” in his diary and apparently enjoyed fellatio, sexual intercourse was out of the question.

Or so he confided to Leila Hadley, offering a rather quaint reason for his abstinence for intercourse. “He felt he would lose his ability to be an artist if he had sex,” she said. (pages 355-356)