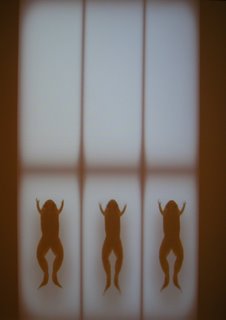 For the Boston Cyberarts Festival, Bostonian Brian Knep, who has been making some of the most exciting new media art hereabouts, presents a group of video-installations-in-progress at Boston’s Judi Rotenberg Gallery.

“Frog Triplets” (at left) is a non-repeating video projected on the gallery wall showing three silhouetted frogs lined up side by side at the bottom of what looks like a competition swimming pool with blurry floating lane markers. As a blurry horizontal stripe repeatedly wipes up the image, gets to the top and then starts up from the bottom again, the frogs fidget, and seem to poop, but actually they are sprouting tails. Now and again one leaps upward, briefly becoming a translucent veiny limbless tadpole, before falling back down and becoming a frog again.

His non-repeating video installation “Frog Time” (below) is similar, but it shows just one frog in lanes oriented horizontally. Here as the line wipes from right to left it seems as if the frog is horribly struggling against a tide or current and constantly loosing ground. The whole while the frog restlessly morphs from frog to tadpole and back again. The piece has an anxious, agitated feel. 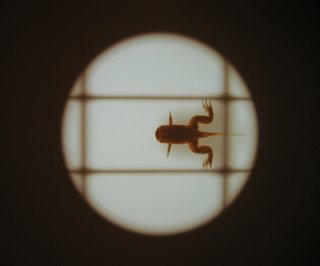 These video installations are the beginning of a project – studies really – coming out of four months of photographing tadpoles developing into frogs in his lab at Harvard Medical School in Boston, where he’s been an artist in residence since 2005. He’s run the some 3,000 still photos that he’s shot so far through software he’s written to create these lifelike digital animations.

Knep’s works often mimic natural systems, and so embody a tension between the natural and the digital. But these installations have the added element of arising out of direct scientific observation. His idea is to use the tadpoles-to-frogs as a metaphor for aging – for our struggle to stay young, to resist the effects of time on our bodies. Knep seems to still be figuring out this project, so this stuff doesn’t all quite come through yet. And at this stage the form, the simple linear movements of the frogs and lines, right or left, up or down, is a bit blah. My understanding is that Knep plans in later versions to make the pieces interactive – reacting to visitors in the gallery.

Part of the electricity in Knep’s work is the way he uses the specific properties of new media – in his case computers’ knack for producing special effects and endless variations within set parameters – to embody his content and create distinctly digital art. As his gallery explains, these are not traditional videos, but computer projections: "There is a computer that is constantly reconfiguring information that Brian inputted. The projection therefore never displays the same image/information more than once."

The frog works represent a move away from his “Drift Walls” and wound-healing digital projections. They make the abstract digital blobs of such previous works seem schematic – almost like studies for the vivid realism here, which echoes the special effects programming he did for George Lucas’ Industrial Light and Magic on films including “Jurassic Park” from 1993. 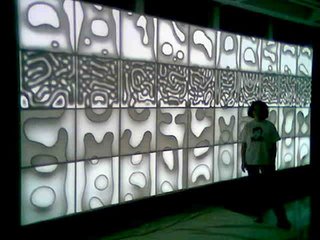 Knep seems poised for an artistic breakthrough, and local museums should celebrate and incubate it, maybe with one of those Momentum shows at Boston’s ICA, or with an installation at the Wall at the Worcester Art Museum or in the lobby of Boston’s MFA. You can see Knep testing out components, tinkering with his visuals, scale, movement. With the frogs, Knep’s work becomes more visually lush. His interactive video installation “Drift Wall 2007” (above) at UMass Lowell through May 11, is larger (20 feet by 8 feet) and more encompassing than many of his past works. And the merging cells video installation he exhibited at Gasp gallery in Brookline last fall could be seen as a study for more complex interactions among the parts of his designs whether they’re abstract blobs or frogs or worms or yeast (the other planned subjects of his “Aging” project). I’m looking forward to the sparks as all these pieces come together.