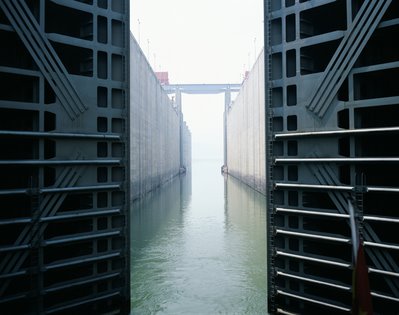 The highlight is London artist Catherine Yass’ 2006 video installation “Lock” (above), which puts you on a barge entering the great concrete maw of the 1.3-mile-wide Three Gorges Dam on China’s Yangtze River. Footage is projected on two ends of a darkened gallery. On one side you see the front of the boat, on the other is the view behind; the room in between becomes, in effect, the barge itself.

The lock’s giant gates hem in the vessel as water pours in. Metal squeaks against metal as the boat rises. Bells ring, a voice squawks from a loudspeaker. Tiny sailors meander the decks. After a blackout, gates slowly open in front of the boat, revealing a narrow channel to daylight. The barge chugs out into calm green water that disappears into mist upriver. Behind, boats line up, waiting their turn to enter the astonishingly humongous stone gates. Lock is a cool ride, a meditative version of one of those IMAX films that put you in a jet plane’s driver’s seat.