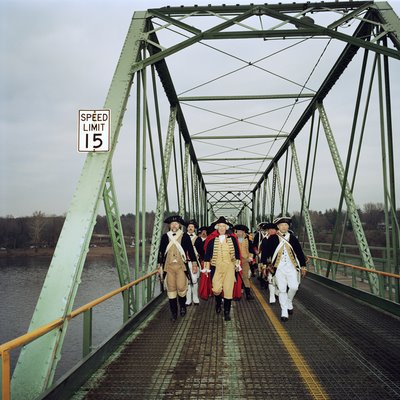 Here’s my review of “Nineteen Lincolns,” an exhibit of Greta Pratt’s color photos of historic re-enactments, festivals, and roadside attractions now on view at Bernard Toale Gallery. “I decided to photograph how Americans remember the past,” she has said, “in order to understand what is revealed by the events we choose to celebrate as history.”

Some photos are straight-up jokes, like Pratt’s 1991 shot of “Washington Crossing the Delaware, Washington Crossing, PA” (at top), in which a Washington impersonator and a gang of guys in spiffy Revolutionary War–era uniforms stroll across a metal truss bridge. The capper is the sign: “Speed limit 15.” So it goes for George Washington’s amphibious 1776 Christmas-night raid that netted 900 Hessian mercenaries at a cost of four Americans injured.

Most interesting here and in Pratt’s 2005 book “Using History” are images in which she scratches at places where thorny radical politics and revolutionary movements get smoothed over and polished into wholesome entertainments and product merchandising.

One image in the book shows an African-American waiter in a suit arriving for work at a 1996 “Confederate Ball” in Virginia. He stops in his station wagon to talk to a white guy dressed in the gray military uniform of the Confederacy. In this mundane interaction between real and re-enactment, the sordid slave-holding heart of genteel Confederate society — the unpleasantness one represses if one is organizing a Confederate ball — flashes before your eyes big and mean and ugly. And “Nineteen Lincolns” includes a photo of an African-American couple dressed up as Black Panthers (above), with a toy-bullet bandolier and fists raised in the black-power salute, at a polite 1997 masquerade ball in Baltimore.

What do we lose when the military might behind 19th-century American slavery and a gun-toting radical ’60s African-American political movement that advocated for jobs, homes, education, and health care become costumes for a night? We forget the messiness and the difficulty, the hard work and the mistakes and the fighting that underlie social change.