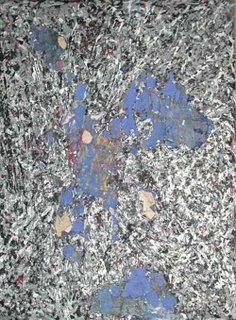 A Harvard examination of one of the disputed Alex Matter “Pollocks” found that a painting that Matter had reported was damaged by a cat appeared to have actually been “scored with a sharp tool.”

“It was a tool, it wasn’t, as far as we were concerned, a cat nail,” Narayan Khandekar, senior conservation scientist at Harvard’s Straus Center for Conservation, tells The New England Journal of Aesthetic Research. “A cat’s claw goes in and then rips out … It pokes in and then it pulls out.” In the damage to the Matter painting, Khandekar says, “You can see a raised burr on either side of the incision, and they’re straight lines.”

The finding was described on page 2 of Harvard’s Jan. 29 report on the Alex Matter paintings, but has been little noticed. It seems to contradict Alex Matter’s description of how the painting (pictured above) was damaged.

“One finished composition from the package [was] destroyed by the clawing of a cat after its restoration. … Restorer Franco Lissi attempted unsuccessfully to paste its pieces back together,” Pollock scholar Ellen Landau wrote of the work in footnote 85 on page 52 of the catalogue to “Pollock Matters,” the current exhibition at Boston College’s McMullen Museum of Art.

An unsigned essay on page 160 of the catalogue says “it was damaged by a cat while propped on a bookcase in Alex Matter’s apartment.” Khandekar says Alex Matter told him that he left a cat alone in his apartment for four days and when he returned the cat had cut up the painting (identified as MBJP29 in the Harvard report and as figure 2 on page 160 of catalogue).

Landau, McMullen director Nancy Netzer and Robin Zucker of Zucker Public Relations, a New York-based publicist for Landau and Matter, did not respond to emails requesting comment. The New England Journal of Aesthetic Research is also trying to contact the art conservator. An email was sent to art conservator Franco Lisi (note just one “s” in Lisi, not two as reported in the catalogue, though this seems to be the right guy), but no response has yet been received. 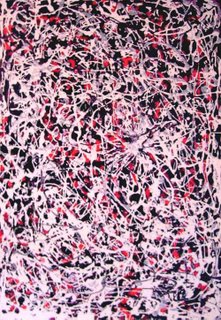 Landau criticized Harvard’s materials analysis in a Jan. 29 online essay: “Harvard's analysis of the destroyed painting is highly problematic since the work was basically reconstructed from bits and pieces after an animal attacked it … See below for comparative images of what the painting actually looked like subsequent to [Lissi’s] initial conservation and then after damage repair – the colors are not even the same.” Here, the before picture is at left, and at top is the after picture, which is how the painting looked when the Harvard team studied it, as is apparent from a photo on page 13 of their report.

Asked whether a conservator could have accidentally done the scoring with a sharp tool, Khandekar says scalpels are used to take samples, but the cuts made to MBJP29 were as severe as if it had been used as a cutting board, “and you’d have to do that accidentally.”

Update: Mark Borghi of Mark Borghi Fine Art, which has represented the estate of Mercedes Matter and been involved with the Alex Matter “Pollocks,” responded Sunday night, saying he made the cuts to the "Pollock":

After the work was destroyed by the cat, Franco "reconstructed" the painting. He was ONLY supposed to stabilize the works. He was never told to reconstruct paint loses. When I received the work in the reconstructed state I was very upset and was able to partially remove Franco's restoration with an exacto knife. This is the "scalpel" effect that Narayan is talking about. This was told to Harry Copper and Carol Mancusi-Ungaro from the Fogg in 2005 when they came to see the paintings. I also told Narayn to ignore this work as it had been completely damaged/restored.

Borghi also forwarded a message that he says he emailed to Khandekar:

After the cat destroyed the work in question, it was given to Franco Lissi to see if he could put any of the work back together. When the painting was returned to Alex, it had been completely repainted by Lissi. I removed some of the repaint with an exacto knife to give an idea of the original condition.

This information was provided to Harry Cooper and Carol Mancusi-Ungaro when they came to NY to see the works in 2005. Based on what Cook reports you said to him, I'm guessing that they did not share this information with you. Both Harry and Carol were told that this work was totally repainted and that testing its paint would be of little value. Of course Mr. Lissi can also confirm the damage done to the painting as he cleaned it in its original state and did the “restoration” as well.