“Shy Boy, She Devil and Isis” at MFA

“Shy Boy, She Devil and Isis: The Art of Conceptual Craft” at Boston’s Museum of Fine Arts presents some 120 objects by 107 artists from 20 countries. The pieces are selected from a promised gift of 250 pieces from the collection of Malden natives Ron and Anita Wornick, who are now based in California. The exhibition includes a number of New England artists. Here are some comments from two of them. 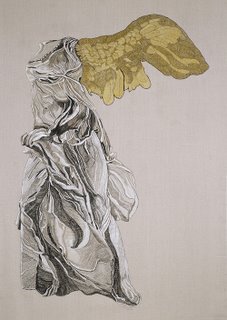 Marilyn Pappas, who grew up in Brockton and now resides in Somerville, retired in 1994 after teaching 20 years at MassArt. Her “Nike of Samothrace with Golden Wing,” 2001, made of cotton and 2-percent gold threads embroidered on linen, is in the show. It comes from her body of work inspired by classical Greek and Roman statuary – particularly of women – that she saw during travels in Europe over the past 15 years.

“They have a universal voice. And they’re broken, but they’re still beautiful. They speak about beauty, imperfection and the power of women,” she says.

“It’s all just hand-stitched. It’s really like drawing in the thread. It’s all just linear. It’s millions of lines. It’s slow but satisfying.”

“I love that I’m working from those marble statues that show fabric and then putting it back in fabric.”

“This would be my first [piece in the MFA collection] and I think it’s great. … It’s an honor. And it sort of validates you. Being an artist you work and work and work because you have to, but when you get the few rewards that you get, it’s great.” 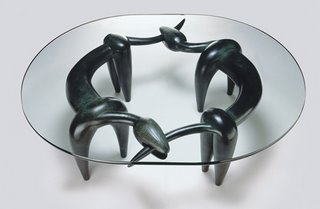 Judy Kensley McKie of Cambridge is represented by “Chase Table,” 1989, a coffeetable featuring a glass top and bronze base designed to resemble a pair of dogs chasing each other’s tails. It would be her third piece acquired by the MFA.

“This piece was the first piece I ever cast in bronze,” McKie says.

“The reason I use animal imagery in my work is because when I started making furniture in the ‘60s it was the height of less is more design.” She recalls looking at a minimalist couch that she made in her livingroom. “I felt the things I was building had no life in them, no color. … Suddenly I started changing the arms into animals, the way you look at clouds.”

Photographs copyright 2006 Lee Fatherree and courtesy of the Museum of Fine Arts.