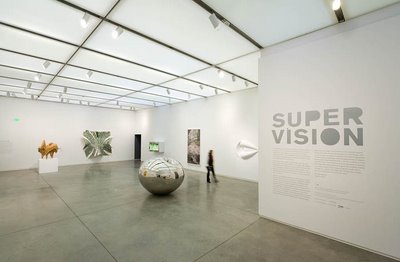 Happy birthday to the ICA, which today marks the beginning of its second year in its South Boston building. I recently reviewed the ICA’s first year. The upshot:

After the wow of the new building, most of the year’s 12 exhibitions of visual art (there have also been theater, music, and dance programs) have felt professional but bland.

But I agree with what JL has been suggesting since the beginning: the curators should be given time to get settled in.

For those who care about how the ICA engages with local art, it’s notable that five of the 22 artists in the permanent collection, which was inaugurated with the opening last year, reside in Massachusetts: Laylah Ali, Ambreen Butt, Taylor Davis, Kelly Sherman and Rachel Perry Welty. Three others used to live around Boston: Nan Goldin, Josiah McElheny and Philip-Lorca diCorcia.

Looking ahead, I’m trying to keep an open mind about the February exhibit “The World as a Stage,” co-organized for London’s Tate Modern by former ICA curator Jessica Morgan (who will be a regular ICA guest curator). The theme is very ahrty: “artists whose works investigate ideas of ‘theatre,’ staging and performance.” Reviews of the London presentation have been mixed (TimeOut London, the Guardian, the Guardian again).

But the Nicholas Baume-curated Anish Kapoor show scheduled for May, “the first major survey of the artist’s work in the U.S. in 15 years,” could be wicked cool. The British sculptor has been doing some fabulous work in recent years, including his 2004 polished stainless steel "Cloud Gate" in Chicago, one of the most dazzling pieces of public art anywhere. The Tara Donovan survey scheduled for September also looks promising.

They haven't had their show yet, the show that's going to rock people's socks curatorially. What's been exciting is the performance program. In terms of a big addition to the cultural life of the city, that's probably been the biggest plus.

Now as the opening fades into history, it's a better time to see what the ICA will bring to the table (and an Anish Kapoor retrospective scheduled for next May sounds promising.)

WBUR also has a report.