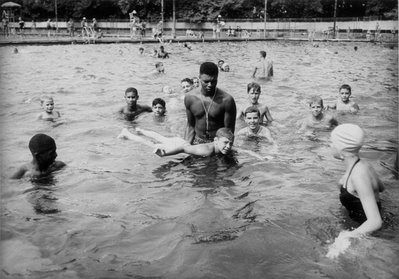 From my review of “Charles ‘Teenie’ Harris: Spirit of Community,” a survey of work by the late African-American photographer which was at Gallery Kayafas in November and December:

In one magnetic photo, black and white boys and girls play together in an integrated swimming pool, probably in the 1950s. The Carnegie Museum’s description of this photo suggests it depicts the very day the pool was integrated. The scene is charged by the ambiguity of the relationship between the black lifeguard at its center and a white boy who’s learning to swim. Is this young African-American subservient to the white kid he’s cradling, or does he enjoy the authority of a teacher and guardian? Are we seeing racial differences bridged, or the same old hierarchies? The photo seems to embody the very moment of transition, with all its hope and nervous uncertainties, from one era to the next.