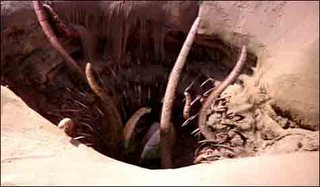 In this week’s Boston Phoenix, prompted by the new film “Teeth,” I wrote about the history of the vagina dentata:

If there’s one thing the new horror flick “Teeth” teaches us, it’s that nothing sours a romantic soirée like a vagina dentata. The phrase — Latin for “vagina with teeth” — conjures men’s primal fear of sex, the opposite sex, the word “vajayjay,” and dentistry.

The term seems to have come into use in the early 20th century, around the time Sigmund Freud was dreaming up his theories about castration complexes. But the idea has roots in numerous ancient cultures. There are Native American tales like the Ponca-Otoe story in which Coyote spends a night snuggled between the sexy daughters of an evil old witch. One girl warns him that they have lethal jaws in their private parts. So Coyote kills the other girl and the witch. Then, according to Richard Erdoes & Alfonso Ortiz’s 1984 book “American Indian Myths and Legends,” he bashes out his gal pal’s vaginal grill “except for one blunt tooth that was very thrilling when making love.”

A sign of the tale’s power is that it persists in modern times. Vietnam vets returned home with urban legends warning of Vietcong prostitutes hiding broken glass and razor blades in their vaginas.

“Teeth” writer and director Mitchell Lichtenstein (son of the late pop artist Roy Lichtenstein) has said that he first heard of the “vagina dentata” in the ’70s, in a college class taught by feminist social critic Camille Paglia. Tuition dollars well spent. These days, it’s used mostly to describe art: an abstracted naked lady with a praying-mantis face in Pablo Picasso’s 1930 painting “Seated Bather”; the monster grins of human-dinosaur mutants in Francis Bacon’s 1944 painting “Three Studies for Figures at the Base of a Crucifixion”; the menacing smiles on the jagged faces of women in Willem de Kooning’s 1950s Abstract Expressionist paintings. It’s also been applied to the fanged space bugs that menace moist tunnels in the “Alien” films.

But these examples describe mouths, not vaginas. (I’m not sure how the Aliens’ bity penis-like tongues fit in.) Actual appearances of vaginas plus teeth in art, literature, and pop culture are few and far between.

Related: Later in the essay I mention how Lee Bontecou made rugged steel and canvas wall reliefs in the ‘60s that had vents or orifices or black holes that were sometimes filled with what look like saw blade teeth. Brown University’s Bell Gallery has an awesome example up right now in its exhibit “Women’s Work.”

Pictured: The sarlacc in “Return of the Jedi.”