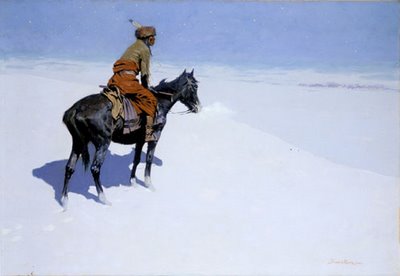 From my review of “Remington Looking West” at the Clark Art Institute:

Others painted the American West before Frederic Remington. George Catlin made iconic portraits of Native Americans in the 1830s and '40s. Albert Bierstadt painted sweeping Western vistas from the 1850s to the 1870s.

But the sharp, concise exhibit "Remington Looking West" that curator Cody Hartley has organized at the Clark Art Institute reminds us that Remington painted the Wild West that became the stuff of pop-culture legend.

Remington (1861-1909) traveled around what is now Montana, Arizona, New Mexico, Wyoming, Texas, Canada, and Mexico. But his base for much of his life was in and around New York City, where he made his name as an illustrator for major magazines and then as a fine-art painter, sculptor, and writer.

Remington's central subject was America's Indian wars of the second half of the 19th century, which were sparked by white colonization of the West.