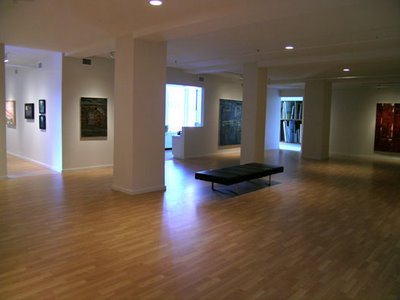 Alpha Gallery will shrink over the summer, as the new Walker Gallery takes over part of its space on the seventh floor at 38 Newbury St. in Boston.

I reported on June 19 that Walker Gallery plans to open “next to” Alpha on Sept. 6. It turns out that Stephanie Walker will actually move into part of Alpha’s space, taking over Alpha’s back gallery (which you can see through the doorway at left in the photo above) and extending it forward through Alpha’s main gallery to the floor’s main hallway.

“We’ve been basically keeping our ear out for something like that for a while,” Alpha assistant director Justin Tiernan tells me. “Except for once or twice a year we don’t really use the second gallery.”

Alpha's main gallery will have a net loss of about 12 linear feet of exhibition wall space, Tiernan says. Alpha has no plans to close, he says; the change was just motivated by the gallery’s long sense that it had too much space.