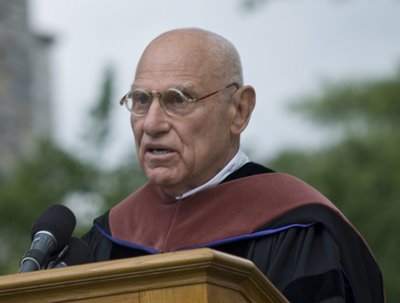 New York sculptor Richard Serra spoke at Williams College’s 2008 commencement on June 1. Here is an excerpt from his speech:

“It’s only your own individual perception that’s going to give reality a meaning. If you don’t make the case for yourself, no one else will. Value your private sensations and sentiments but beware of the distortions by analogy and metaphor. The constant need for referents prevents direct experience. Experience does not always need to be compared and related. The habit of recalling stored imagery subverts both what’s present and what’s being re-called. Analogies and metaphors fail to impress a solid image on us. I have no problem with the virtual reality on your screens as long as you are aware that it is virtual. My concern is that experience by proxy is a poor substitute for the reality of the interactive space we inhabit. As a sculptor I believe that perception structures thought and that to see is to think and conversely to think is to see. The virtual reality of the media, be it television or internet, limits our perception in that it affects our sense of space. It immobilizes our ability to apprehend actual physical space. Don’t let the rhetoric of simulation steal away the immediacy of your experience. Keep it real, keep it in the moment.”