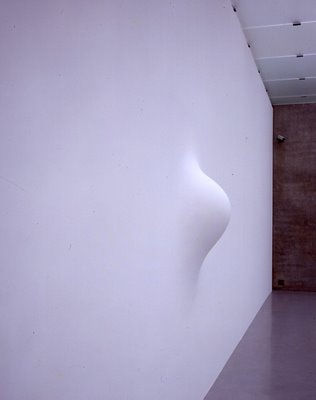 From my review of “Anish Kapoor: Past, Present, Future” at Boston’s Institute of Contemporary Art:

Over the winter, I made my third or fourth pilgrimage to Anish Kapoor’s “Cloud Gate” in Chicago. People there have affectionately nicknamed it the “Bean” because it resembles a giant floating bean of liquid mercury that’s drifted down into the middle of the downtown plaza from outer space. Bemused crowds stand around and stare and snap photos and giggle.

The 2004 sculpture is Kapoor’s masterpiece, and one of the best public sculptures in the country. It’s a metaphorical gateway arch to the city, tall enough for crowds of people to walk under. Like the best public art, it identifies and then embodies the meaning of its location — in this case a park that showcases the city’s skyline to one side and its lake shore on the other. The sculpture’s polished steel surface mirrors and frames and swallows these vistas, and the people standing around it, like, as a friend says, a giant snow globe turned inside out. The roof inside is concave and operates like a funhouse mirror, warping the reflections of the people underneath and seeming to funnel up into some portal to another dimension.

“The modernist tradition in form is mostly phallic, mostly upward and onward, and it leads to the rocket and the spaceship,” the London artist told me at the Institute of Contemporary Art last week, where “Anish Kapoor: Past, Present, Future,” which is billed as his first major US survey in 15 years, opened on Friday. “I have a feeling that the truly modern — meaning modern of today — the ultramodern form is inside out. And I’m trying to look for it. I try to look for inside-out forms. If one could say there’s a shape to the Internet, I’d say it was inside out. Or rather, involuting.” 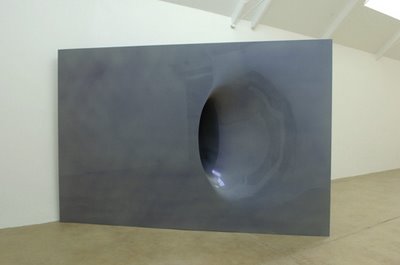