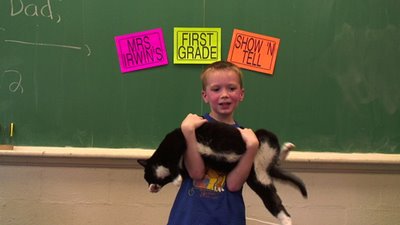 “Show and Tell” is a funny-sad collection of videos by Alyse Emdur now on view at LaMontagne Gallery. (Watch a sample here.) She recorded first-graders presenting show-and-tell items in their fumbling endearing way to classmates at schools in New Jersey, Oregon, Florida, Washington, Maryland.

A boy shows off his yoyo. Girls snuggle dolls. A boy struggles with his squirming cat. A girl presents an aluminum baseball bat. A boy brings in his dad’s bowling trophy –“but I’m going to say it’s mine anyway.”

Emdur, who’s in the process of moving to LA, is one of those collecting, cataloging, anthropological artists, coming out of the tradition of August Sander or Mike Disfarmer or Bernd and Hilla Becher. Her cinematography is deadpan rudimentary. She pretty much just sticks the camera on a tripod, turns it toward the front of the classroom, and lets it run. What makes her work interesting or not is her subjects.

At first “Show and Tell” feels like a joke, a lark. But as you watch, it deepens, becoming something about keeping up with the Joneses. And then something about our stuff as talismans, good luck charms, relics.

A girl with big brown floppy stuffed dog says, “My name’s Emma and this is my stuffed animal named Paco and he’s important to me because I can talk to him when I’m feeling sad and also he’s my favorite toy.

The shown-and-told objects are tokens of friends and family, of missed loved ones. A girl with a mood ring says, “It’s really, really special, I got it on my birthday, which was a few days ago. I got it from my friend Maggie, which is in the second grade.”

A boy shows a sports jersey that was a gift from his dad whom he doesn’t see much. A doll was a gift from a now dead grandfather. And then there’s a shaggy-haired boy who haltingly describes his phone book: “This is my Marquette-Haunton Yellow Book that my dad sent to me. Um, it’s like maps in the state where I used to live.” 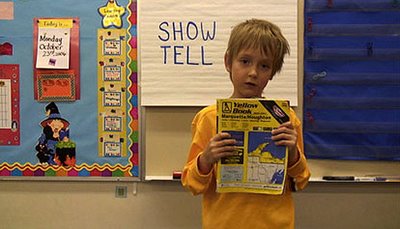 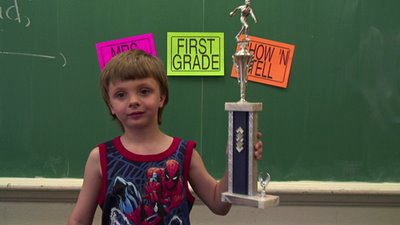 Thanks for posting this. I spent a long long time on her web site.